We took our last train from Bangkok to Aranya Prathet, and then crossed the border for Cambodia by bike. We had prepared to negotiate our visas since apparently the scams run the streets but everything was in order. The border officers are shouting at us gently with their natural tact of customs officers, and after 3 stops to different desks, we are officially in Cambodia. We meet European tourists who go to Thailand, a chance because Alice has been walking for a few days with a dozens of postcards stamped without finding a post … the postcards have crossed the border, then crossed it again in the bag of the tourists to arrive safely in the mailboxes of our friends!

First shock in Cambodia: although a station is indicated on the map, there is actually no train … we are a little destabilized and seek a bus to reach Siem Reap, 200 km from here, because the road has no interest to be cycled. The buses cost $ 9, which is 5 times more expensive than what we paid for the train the day before in Thailand. Who said that Cambodia was a very cheap country? Many people, but after spending 3 weeks in Cambodia, not us! We are clearly told that this price is exclusively for tourists. We hope, because it corresponds to a good day’s salary of a Cambodian. 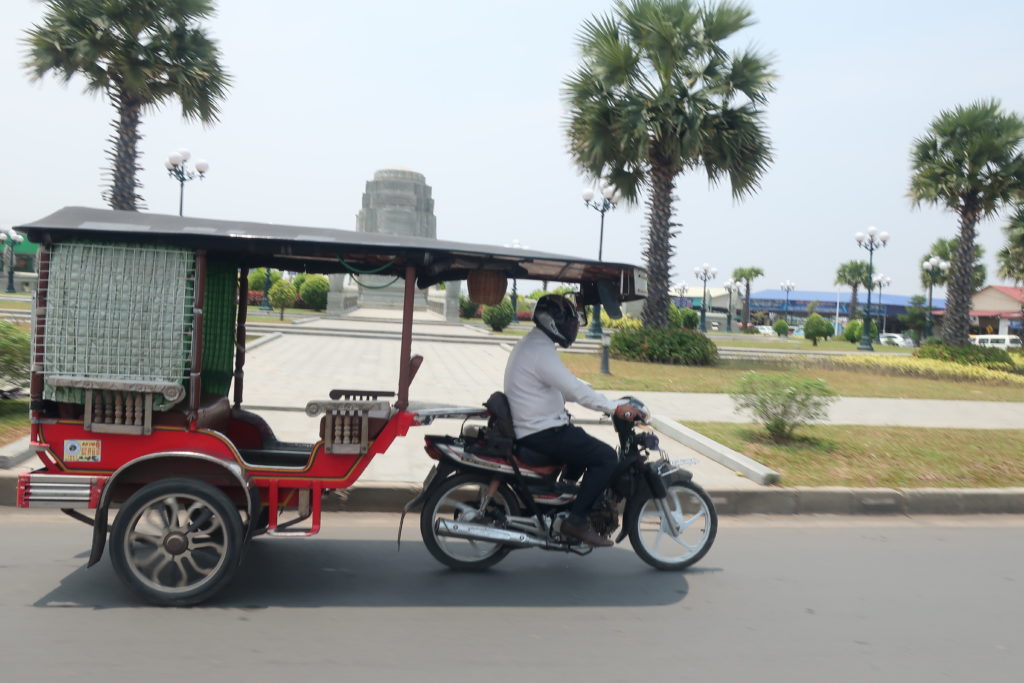 So we arrive in Siem Reap, cult place of visit for its famous temples: Angkor Wat. A few days earlier, we heard about it for the first time and decided to go there, Siem Reap being on our way. Learning that the management of the temples was sold by the king of Cambodia to a Vietnamese private company for the next 100 years, and that the price is $ 37, it cooled us considerably on the tourist visit. We decided to go for a bike ride around the temples (because it is a huge set of temples and tombs). We took the small roads and discovered the pretty traditional Cambodian villages. Then without a warning we arrived at a huge parking and in front of us was standing the most famous and largest temples of Angkor. We sat at the edge of the water and enjoyed the view. You should know that all the temples are surrounded by water, ingenious calculation allowing the temples not to collapse in the sandy soil of the jungle because the water, penetrating the sand, makes it as resistant as concrete. What a wonder, and how many questions spring up when you think that these temples were built in the jungle, all in stone and almost 1000 years ago! We got back on our bikes and rode, we saw some ruins and stopped to watch when someone asked us “Ticket please!”. We explain to him that we are only walking around and not going where there is a need for a ticket. He panics a little and tells us that we should not be here, that it is amendable and that it is expensive! Oh, even the roads are private now in Cambodia. So we leave without giving him time to call security and decide to take the small trails. We have gone from being a dreamy loafer to being an illegal fugitive, so the ballad brings more adrenaline! 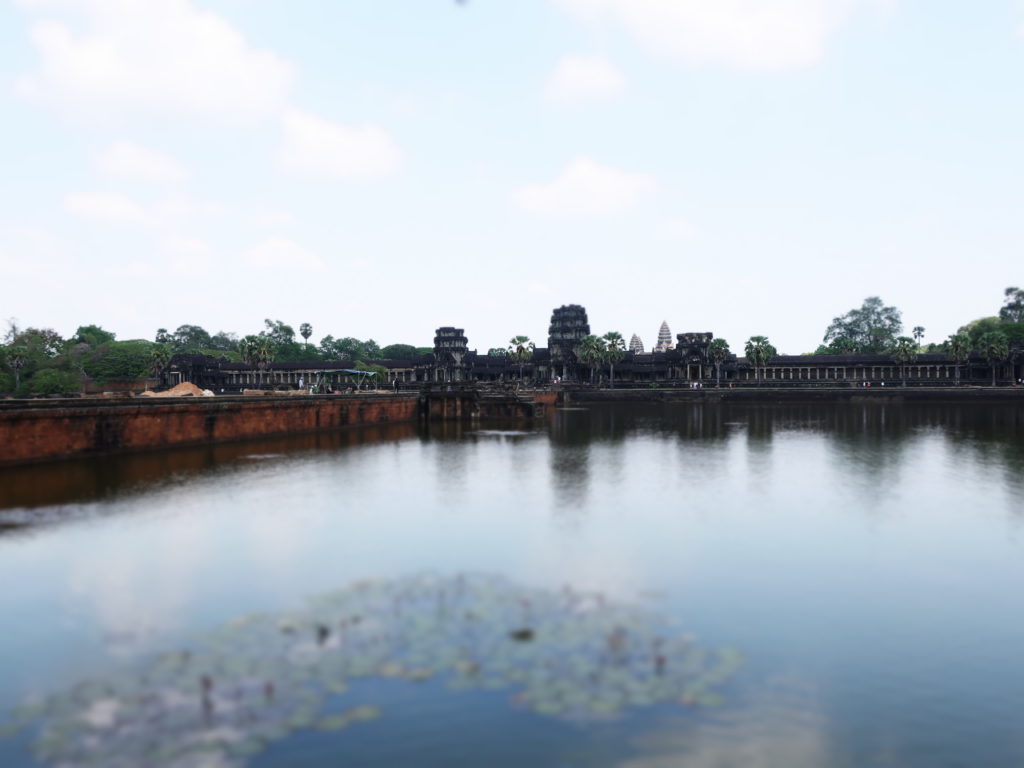 After three quiet days in this touristic town to visit a few small attractions, including this engineer who reproduced in miniature the main temples of Angkor, we take a bus to Phnom Penh; It’s time to make our visa for Vietnam and wait for our friend Catherine, who will join us soon. 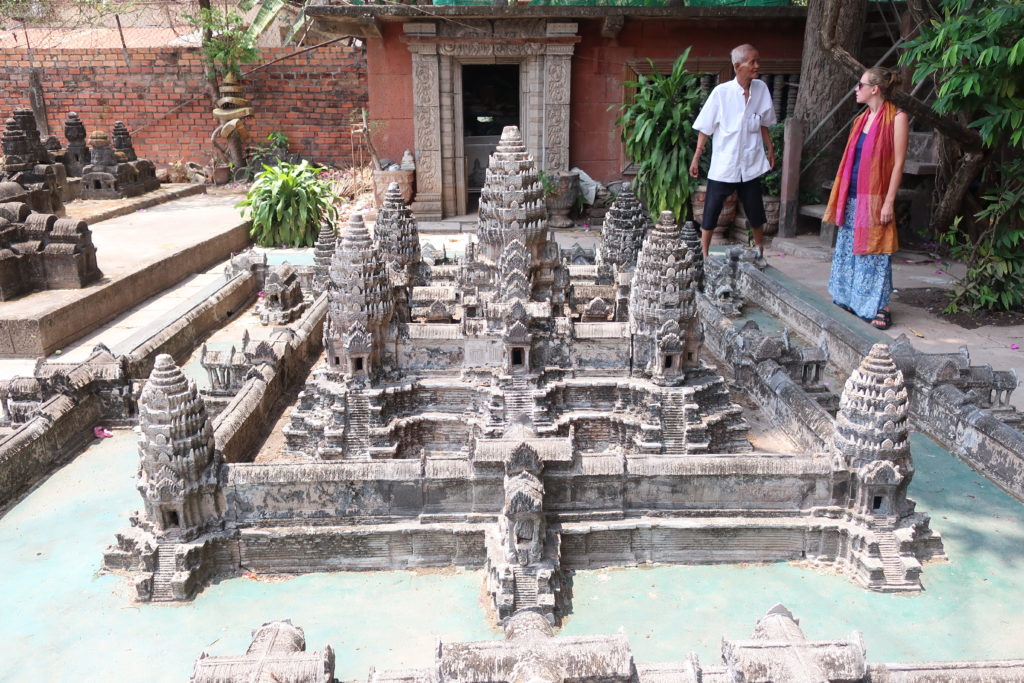 The heat is hardly bearable, and it is even stronger in cities, with pollution and little shade. We therefore welcome the hotels that offer us pools and play rich tourists. We walk around the city and come across scenes that do not leave us indifferent … apparently, the protection of turtles is not a reality here. 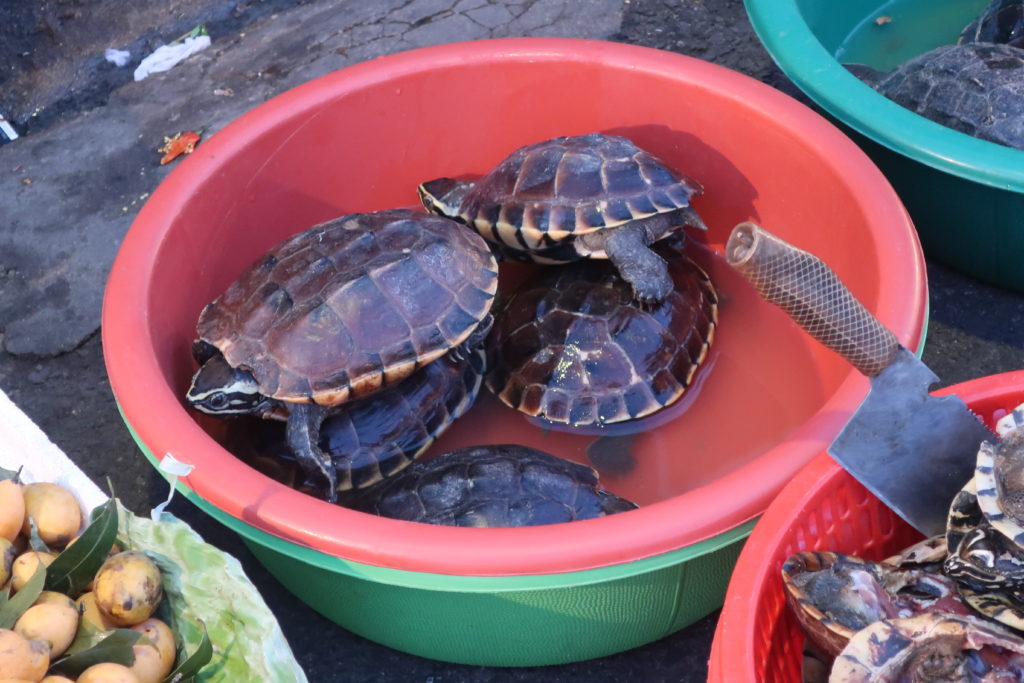 Finally Catherine arrives and it feels very funny to see a friend of our pre-trip life, here, on the trip! It’s nice to be able to communicate and talk about what we’re going through every day with someone else. We realize that since our arrival in Southeast Asia, we have had few meetings where a real sharing of experiences could be done, either that people spoke little English, or that there was no interest, or that our cultures and personalities diverged too much. It does not matter and we are fortunate enough to be two to share, but sometimes on the trip, we have the impression to see, observe, listen, take take take, and never be able to give back with what we are made of. How lucky we were to be able to share 3 weeks of travel with a friend and see the country through her eyes, and exchange our views on what we are living everyday. 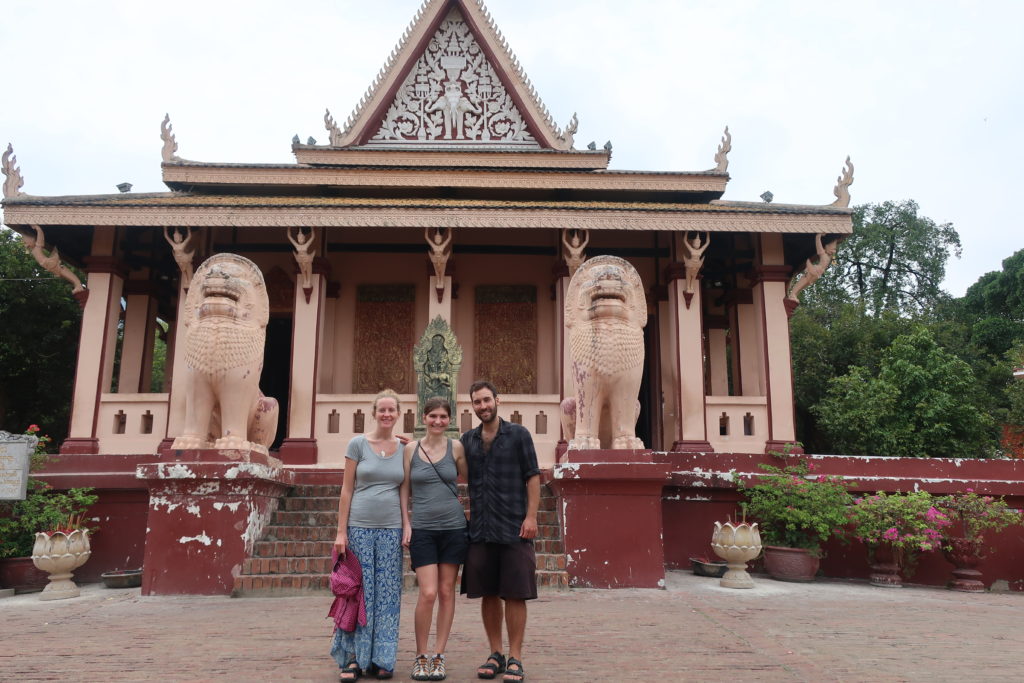 Catherine being much more dynamic than us, we had to adapt. We rented a bike for her and went to discover the Silk Island, where we could see the chrysalis of the silkworms, then spinning, then weaving on old wooden crafts. We were stunned by becoming aware of the amount of time it took and concentration to produce a single scarf. 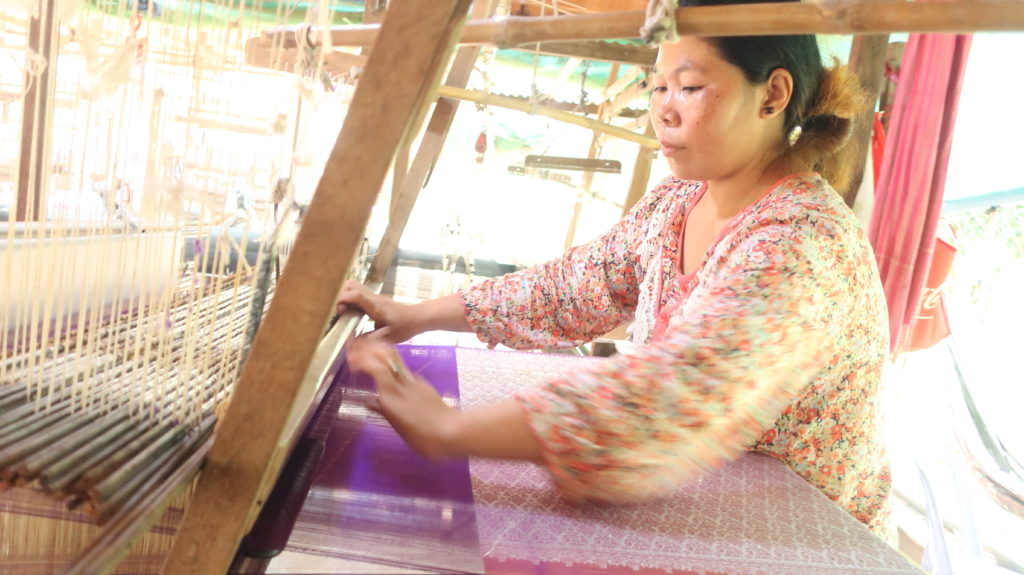 We visited the PSE (For a Child Smile) school which we  knew thanks to the documentary Les Pépites that we had seen in Switzerland more than a year ago. Starting from the observation that children were spending their time and were feeding themselves in a landfill west of Phnom Penh, a French couple set up an association to help them evolve. We particularly liked the approach which always started from the need of the children and not from the will to give itself a good conscience of some Europeans. For example, the children first asked for one meal a day, and then for health care and and then education. Little by little, the association developed and a school opened, then a training center, and today there are more than 2000 children whose families suffering from poverty who are educated and trained thanks to PSE. The simplicity of the place and the local management touched us.

Failing to visit the famous temples of Angkor Wat, we made a hike south of Phnom Penh to visit a small temple. The ancestral spirit and greatness is always present, but we were surprised to find on our arrival a group of girls ready to follow us 500 m to sell their flowers, using all the strategies to move us. We had also seen girls in Angkor Wat, and this is the only country in South East Asia where we found children working in this way in the streets. Unfortunately, if they are still there, it is because too many tourists continue to encourage them by buying their souvenirs, thinking to allow them to earn some money but only helping them to stay begger for life. 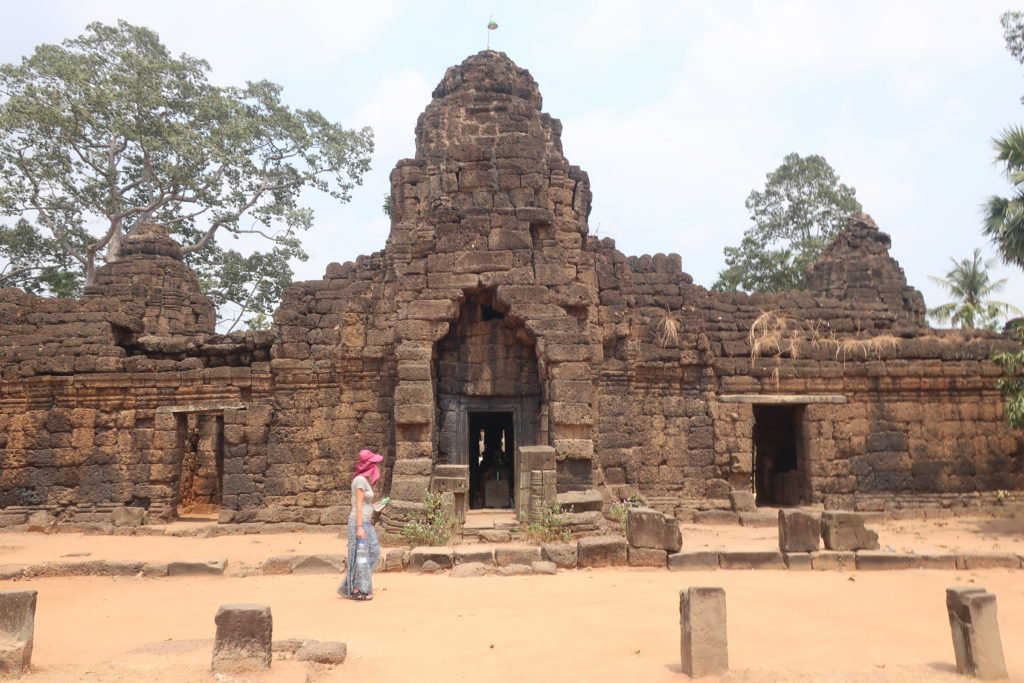 We stroll left and right in the city, visiting temples, museums, stopping at an old man table to read our future in the cards at night, along the Tonle River.

Tired of the city and its pollution, we then spend 2 days in Kiriom Park. By chance, we arrived at an eco-tourism center. The guide who was working that night tells us their story: during the war, the Khmer Rouge had taken refuge in this park and had hunted the population who had taken refuge in the city below. Once the war ended, the population was without money and many had died of illness and undernutrition. They returned to the park but had to deal first with the problem of all the mines that the Khmer Rouge had laid. Then, having nothing left, they began to cut the trees of the park to sell them. An organization seeing the massacre of the park proposed to train a group of villagers to go towards an ecological and perennial transition. This is how they created this center which offers several activities and helps to the community. After sleeping in one of the houses of the village, we left in search of the famous waterfall of 40 m! We found it after a beautiful walk in the forest / jungle and savored the coolness of the water! A little fright for Alice who wanted to be the adventurer and go under the waterfall… and finally slipped on a stone whose fine mud due to constant humidity had fooled her reflexes. 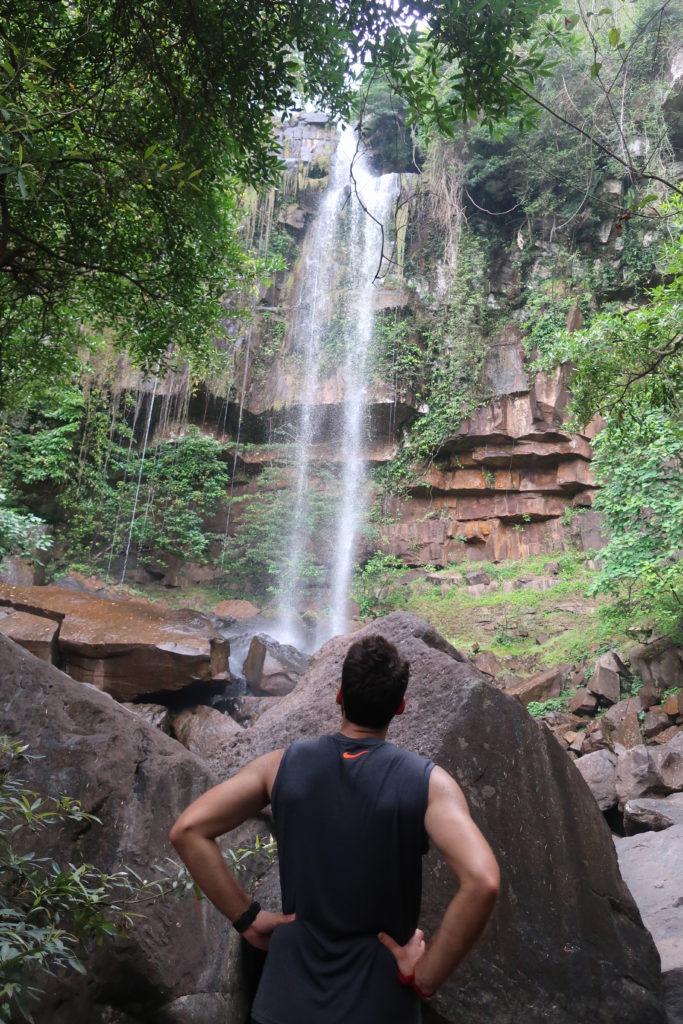 Back in Phnom Penh, we take a boat on the Mekong, this majestic river of more than 4000 km, which will take us to Chau Doc, a city on the border of Vietnam. This will be the first time we will cross our border posts directly on the water. We first planned to cycle down the river, but realizing there were no hotels on the road, our plans have changed.

What surprised, moved, questioned us during this small glimpse of Cambodia: