Yes, yes, one of the objectives of our trip was “not to take a flight”… but between utopia and reality, the trip has already made us many times take different paths! So it was by plane that we decided to join Japan, a destination also not planned at first but which came out when our friend Émilie proposed us to travel together there! 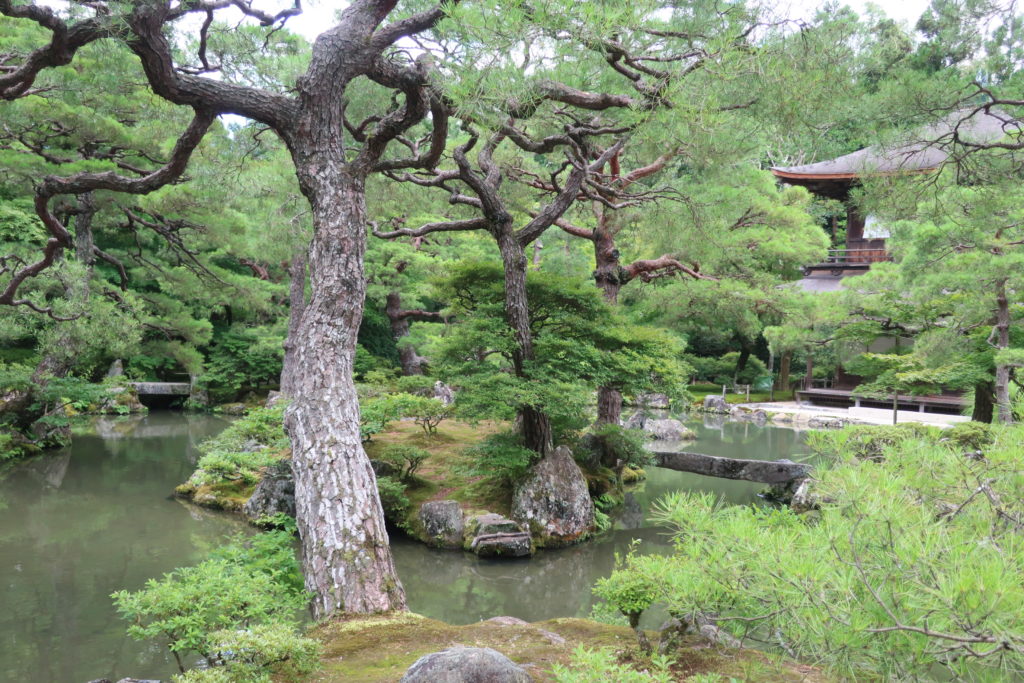 Knowing that we are not fans of transport, we decided to cut the trip in half and sleep in Kuala Lumpur before flying to Osaka. So we arrived in Malaysia full of emotions, exactly 6 months after arriving there for the first time. We were all happy to find this particular air, this mixture of culture between India, China and Malaysia, the food, the way of driving … in short, happiness. We had taken a hotel right next to the airport because the next day our flight was at 8am, so we had to get up early. Before going to bed, we booked the shuttle from the hotel to the airport for 6am, so that we will have the time, when we arrive at the airport, to eat a roti Canaï, those Indian crepes that have feasted all our mornings during our time in Malaysia. 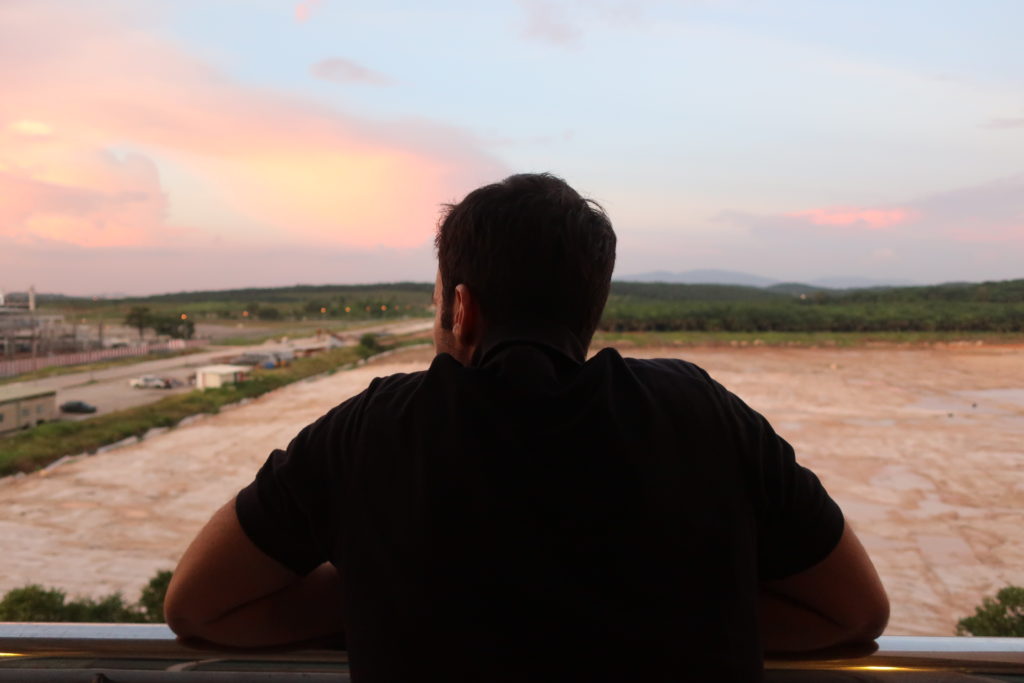 The next morning, a little off, we take the shuttle. We are a little short with the timing so we hurry in the airport. Before going for breakfast, we check the billboard; and there, incomprehension. Our flight is well displayed, but it is written next to it “last call”. A little momentum of panic. We decide to go directly to the departure floor to check. On the way, we feverishly check our plane tickets to be sure it’s the right flight number. Once up there, two nice ladies at the information tell us where is the gate of our flight. Alice asks them why it says “last call” on the billboard and at the same time, Mehdi sees a clock: it is 7:35. What??! It is not 6:35 ?? Apparently not in the airport anyway! We do not understand what happened, but we do not ask any more questions, we run because our plane takes off in 25 minutes! 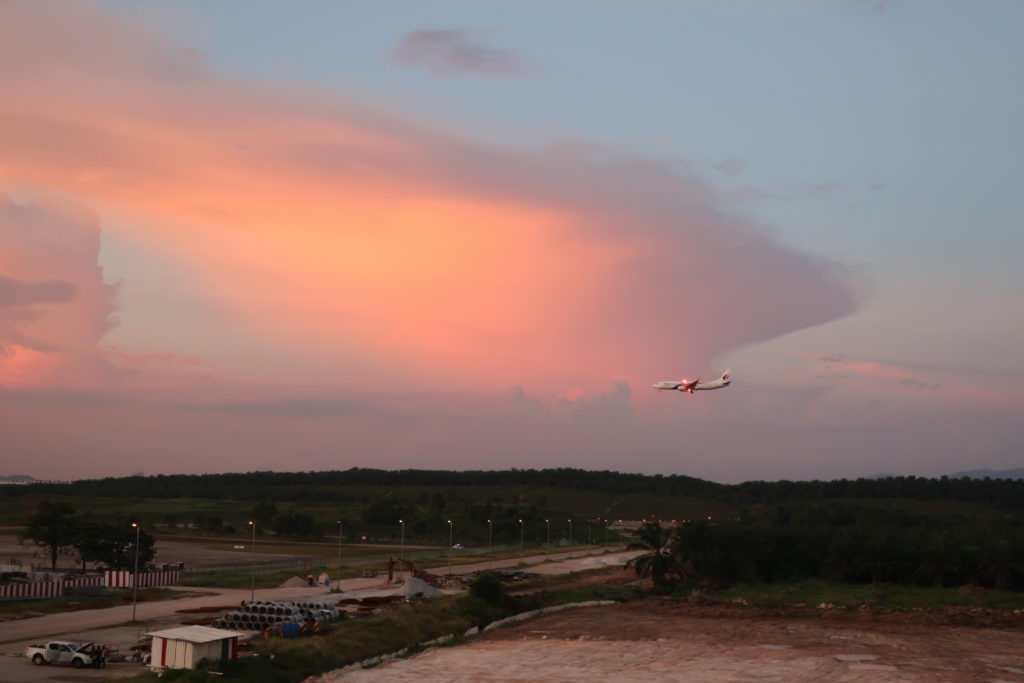 Passage of a first security post, the Malays make no problem, run in long corridors where we have to shake a little the passengers, customs passage, so lucky there is no queue and a customs officer immediately calls us and stamps the passports in less than two seconds; race again in stairs and corridors; the heart beats hard, the breath is missing, these are the kind of moments that do not last long but that seem like frozen and we really do not know what will happen in the minutes that follow: will we get our plane or are we going to struggle to find another plane and blame ourself all day? Passing a second security post, we double a few people but fortunately there are not many people. We see the corridor of our gate, it is written another 15 minutes walk to reach it. We run and suddenly the door is there and someone is shouting “Osaka?”, “Yes yes yes !!!” we still manage to say. Check here again from the customs but we are relieved, we managed!!!! Moral of the story, do not trust the automatic clock of the phones if unfortunately another time you set it time manually … it can make a cocktail that makes you arriving late one hour at the airport! We are still proud to say that in 25 minutes we managed to take our plane in an international airport, it will remain in our records without a doubt. 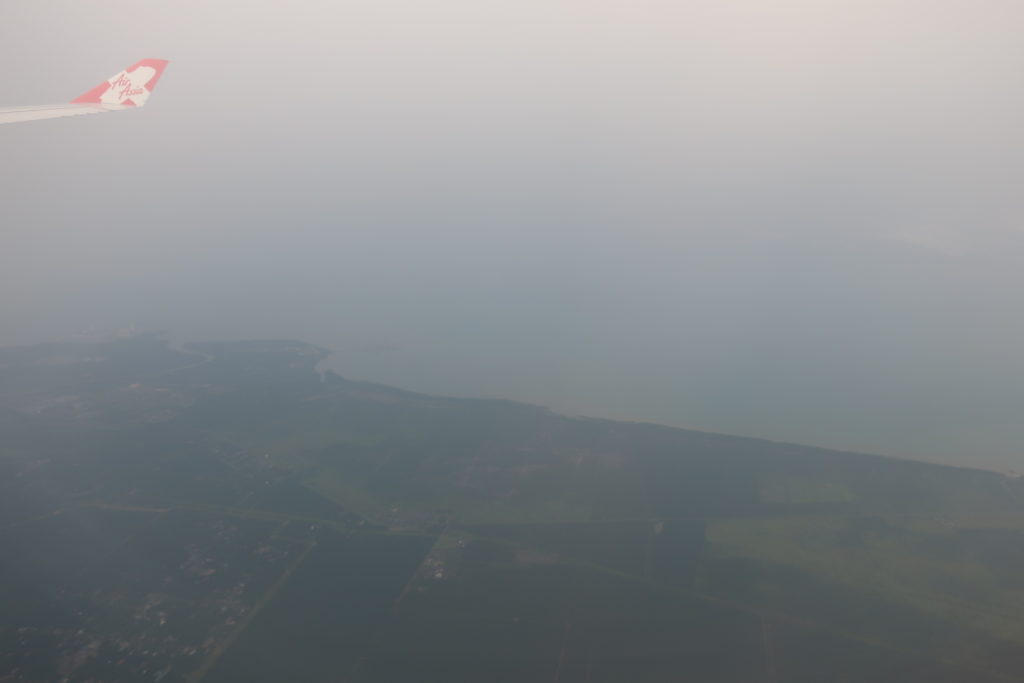 So here we are on the way to a country in Asia, but that seems to us very different from all the countries in Asia we have visited so far. Indeed, arriving in Osaka, we are immediately amazed to find Japanese politeness: in the train we take, the controller, entering the car, declaim a series of sentences and bow several times. She then checks our tickets and make another bow before moving on to the next passenger. That plunges us into the bath of Japan! We arrive at night in Shinji and Keiko’s house, a couple of farmers, and also meet Priscillia, another French volunteer. 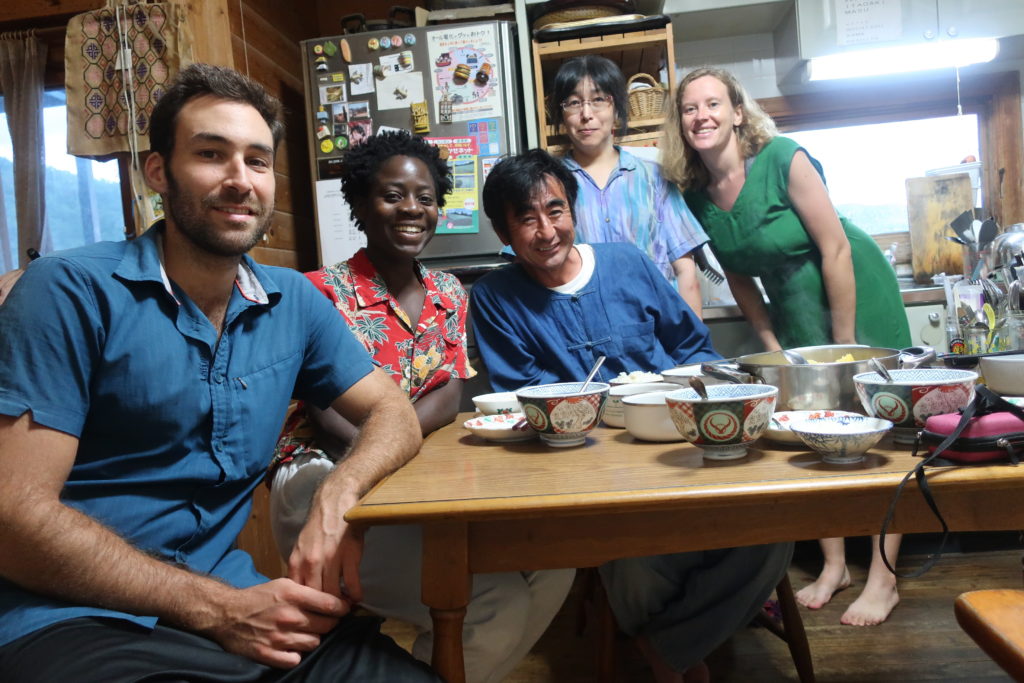 The work starts at 6am, it changes our usual pace. We do weeding, feed the ducks, pick up zucchini, cucumbers, snow peas, okra, we take care of chickens, tame the plants, sort and clean the potatoes, prepare the vegetables for the deliveries … a whole bunch of varied activities that occupy our days well! Shinji has an organic farm and he delivers his vegetables and eggs every week to 300 families. It’s a bit like the AMAP system in our countries, but here it’s called Teikei. It is therefore very interesting to learn how the network works and what techniques the Japanese have developed for their organic farming, because with their climate, they obviously could not follow European agriculture. Several great techniques have emerged, including duck technology in the rice fields: rather than using a round-up to get rid of weeds, just let the ducks take care of the rice field; they will go wading in search of insects, which will prevent the weeds from growing because the mud is in motion, and they will eat the insects that could attack the rice. We have ducks that live outdoors on a large plot of land, and rice that grows quietly without fertilizer. 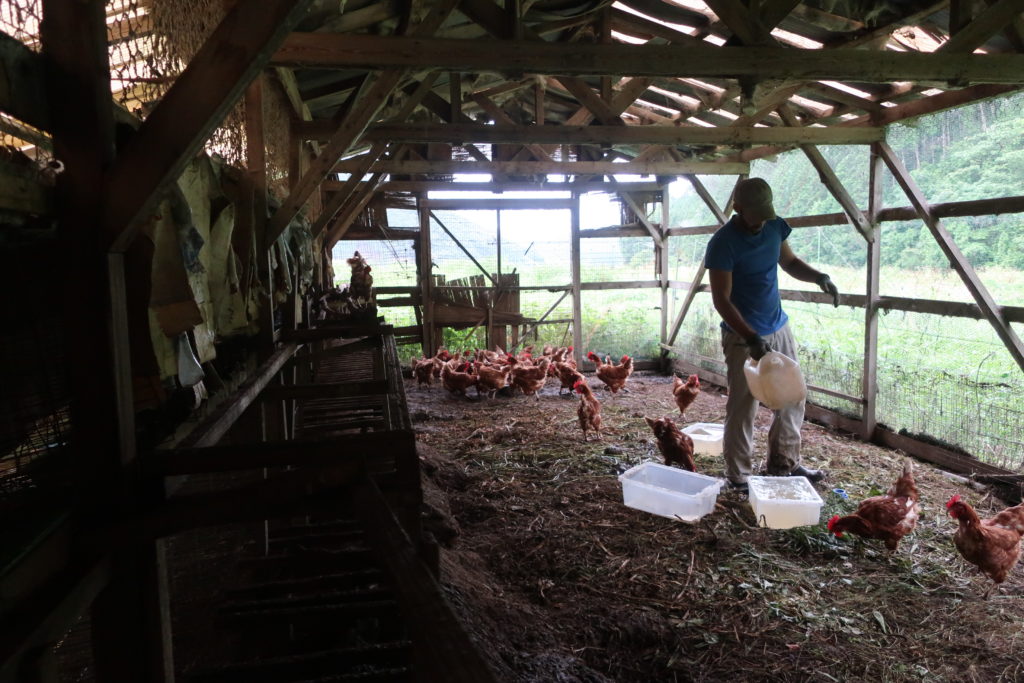 On the 3rd day of our stay at the farm, the sky darkens considerably. We are happy because for 6 months we only know the sun. Heavy rain begins to fall in the evening; it continues in the night, it continues in the following day, it continues in the night, and again the day after! We have never seen so much rain fall in such a short time. Shinji tells us it’s a typhoon, and that it happens every year in Japan. Himself, three years ago nearly lost his entire farm because of a typhoon that had caused severe floods and landslides that had covered all his fields and farm with mood. He advises us to stay inside if the rain continues to fall heavily. Fortunately, it finally stopps but still did damages: broken roads, landslides, channels that overflow … the town will have a lot of work, and Shinji lost part of his harvest. Yet this is nothing compared to what happened in several other cities in Japan where dozens of people lost their lives and thousands had to leave their homes that were flooded. We are impressed to see that the Japanese experience disasters such as this one every year, and that without respite, they rebuild and resume their lives from before. Whether it’s a tsunami, an earthquake or a typhoon, they never seem to be spared by nature, which they consider with respect but also fear. 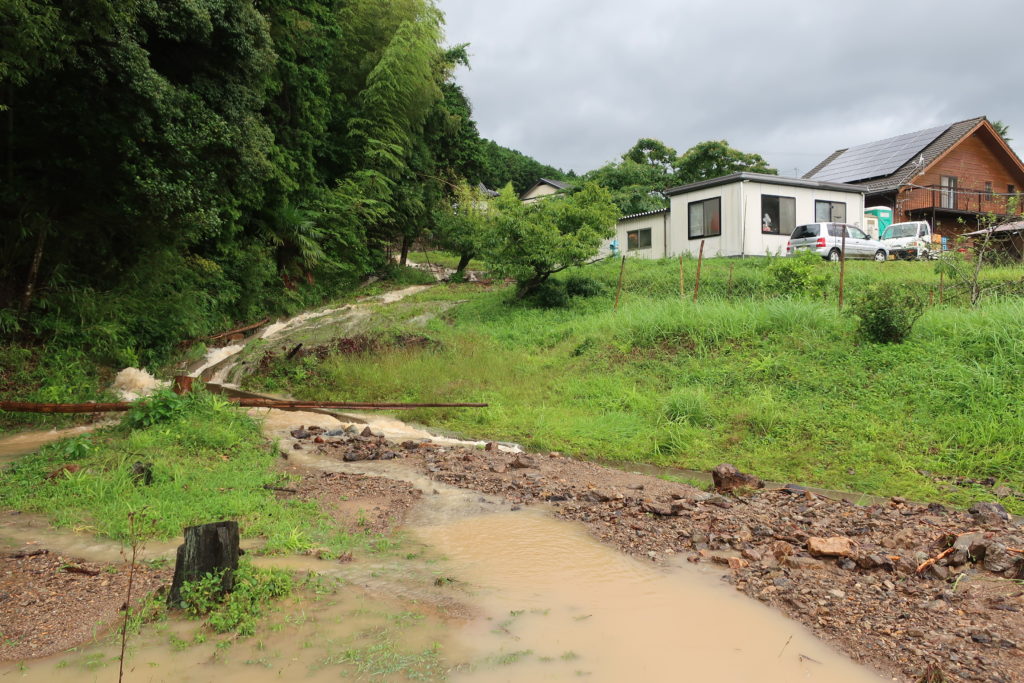 After a week on the farm, we decide to spend a few days in Kyoto. Even if Shinji adapts the work so that it is not too tiring for Alice, it is necessary to face the evidence that the work on the farm is in any case tiring. We are hitchhiking because the trains are canceled because of the typhoon. We wait in the small village of Ichijima with our panel that Mehdi has nicely made by copying on the internet the 2 kanji characters that mean Kyoto. After 15 minutes, a nice lady stops and drops us directly in front of the Kyoto station, 100km away. We did not ask for so much! We can not talk much with her because her English is very basic but the excitement is there and her baby sitting in the front gives us beautiful smiles. 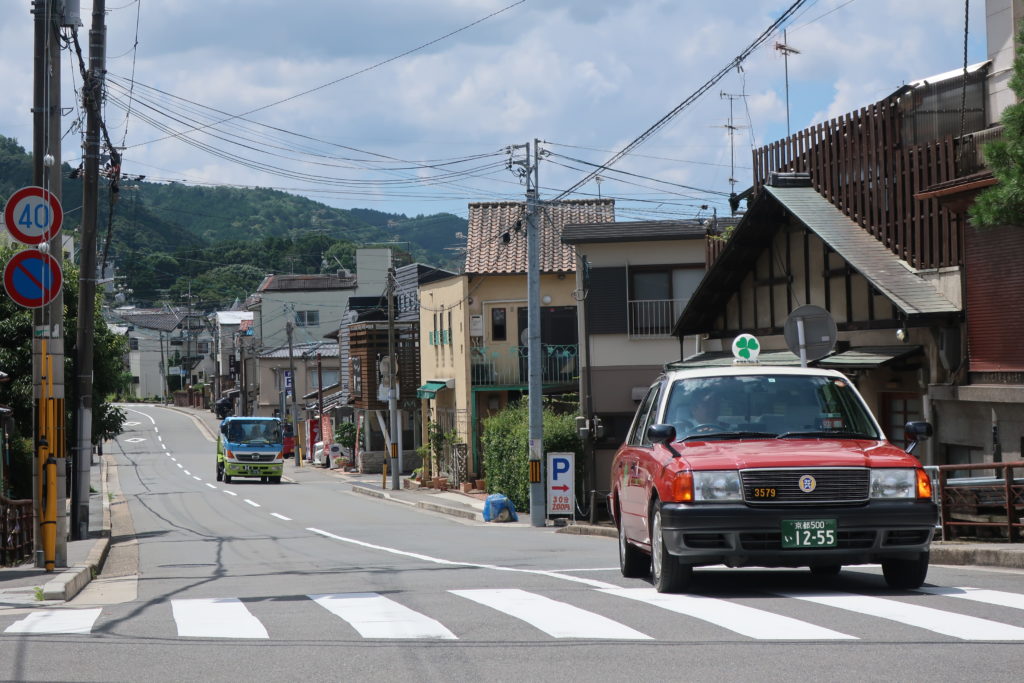 So we spend 4 quiet days visiting some temples, walking, resting, seeing a purification parade of a Shinto god’s shrine, and especially discovering the onsen, the famous hot bath where it is good to go relax and wash away from fatigue! We promise ourself to return at least once before leaving Japan and regret not having this kind of bath accessible at home, with ease and for reasonable prices. 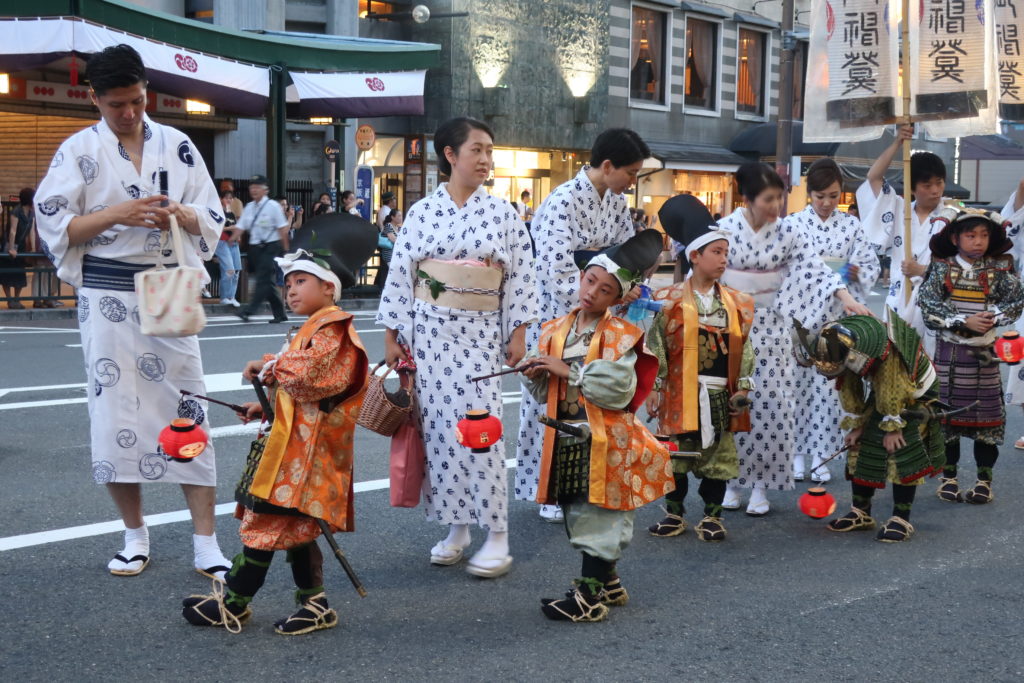 After all these discoveries and twists, we are ready to take the high speed train to join Emily in Tokyo and visit the country with her. 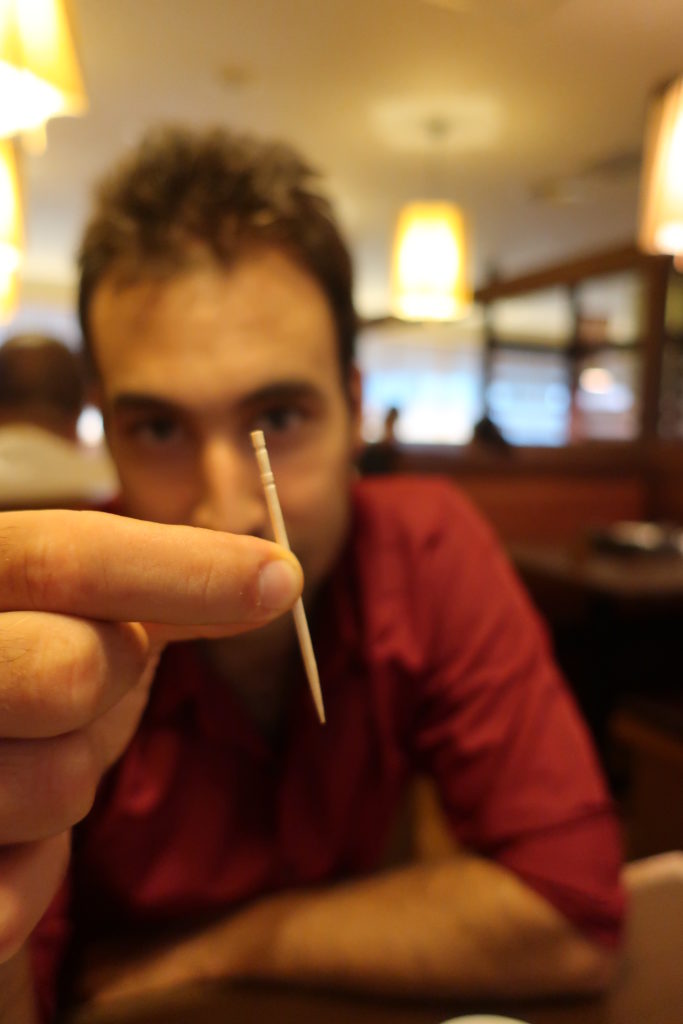 6 Comments on "Arrival in Japan, what an adventure!"