December 29, 2017, arrival at the Kuala Lumpur airport (or KL for locals): we almost didn’t sleep and are totally out of sync. Moreover, until now, the fastest public transport that we took was the bus … so no need to explain that the distance traveled with the plane in 8h leaves us in shock. We put the bikes in a taxi and we go to the hotel that we previously booked in Port Dickson to take some rest and understand what is happening to us. 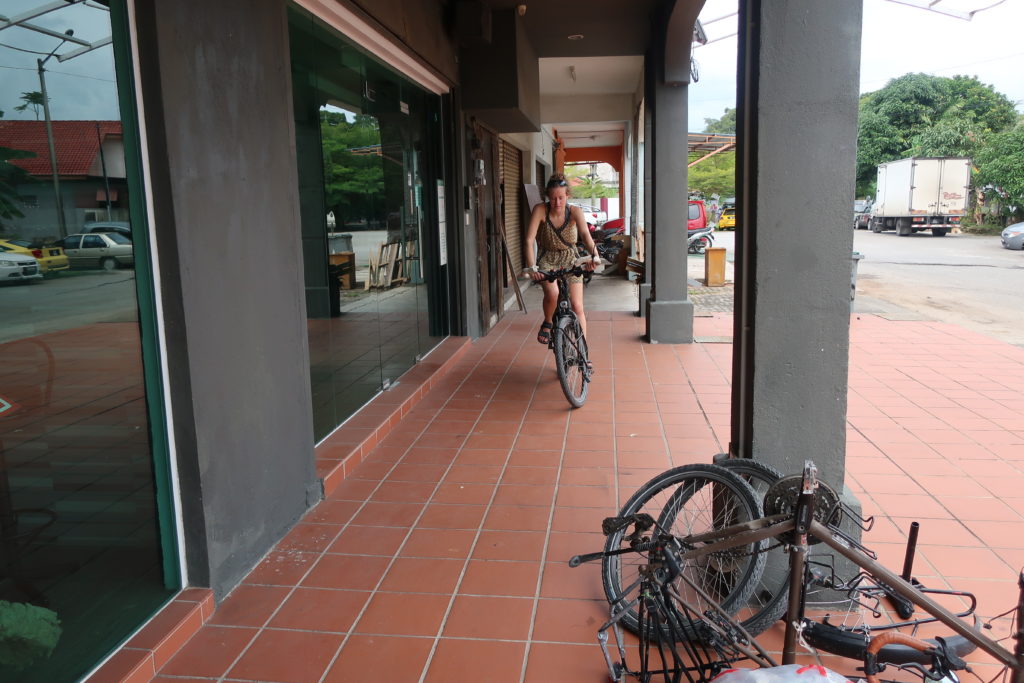 In the evening, after a nap of 3 hours, we get somehow in the first restaurant that we see. A nice lady brings us a menu with fifty different dishes of which we have no idea of ​​their content. We smile at her and ask her to give us a good dish that she would recommend, not too spicy please. She smiles and returns a few minutes later with two large bowls of red soup. Inside, slimy seafood, shrimps, and noodles. We are hungry. But after three spoons, our mouth begins to explode. We order white rice. We manage somehow to eat our soup with the rice, and return to the hotel even more lost than before. On the way, we want to buy bread for breakfast. We find only soft bread; we will discover that bread does not exist in Malaysia. A difficult early trip for our stomachs in this country. The next day, we are disappointed to find out that the coffees are nescafés, so we prefer to take tea, which is served with sugar and milk. Mehdi will discover halia tea (ginger), while later, Alice will discover Kopi (a sort of filter coffee with condensed milk and sugar). It’s actually nice.

Second day, we decide to ask for dishes without chillies at all, which we do in another restaurant (Chinese this time). We then receive rice with vegetables, which are well spiced anyway but more easily eatable. Only downside towards the end, the little worm that Mehdi discovers on his fork. We leave the rest of the food on the plate. Later, it will always be Alice who will receive midges in her juices; Mehdi having apparently been vaccinated by the worm of the 2nd day. 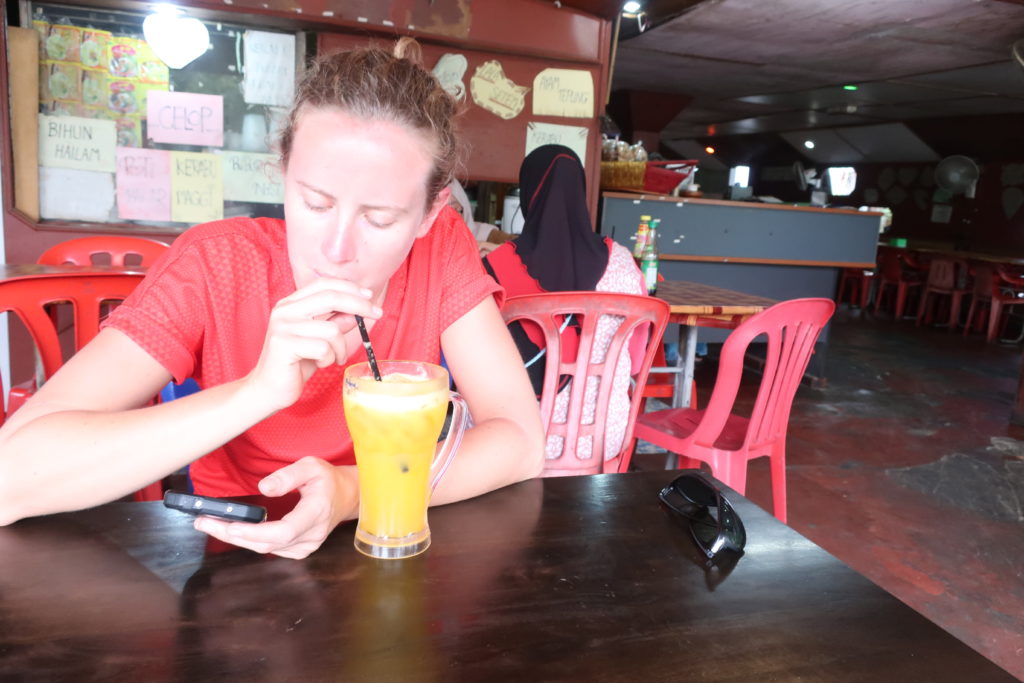 Well, even though we suffered a little during the first two days in relation to food, it allowed us to learn about the good food we like in Malaysia. You have to know that to say hello, the Malaysians ask to each other: “Sada makan (have you already eaten)? »; it means how important food is to them. So, that’s what we discovered:

This recipe comes from India traditionally, besides Cenai is pronounced Chenai, like the city. It’s a kind of pancake artistically prepared from puff pastry (see in our video), that Malaysians eat it at breakfast, sometimes accompanied by an egg, sardines or other salty dishes, but most often a lentil soup in which they dip their pancake. As we are good French and Swiss Romand, we prefer sweet breakfasts. So, we bought our honey and eat our Roti Cenai every morning in our fashion! 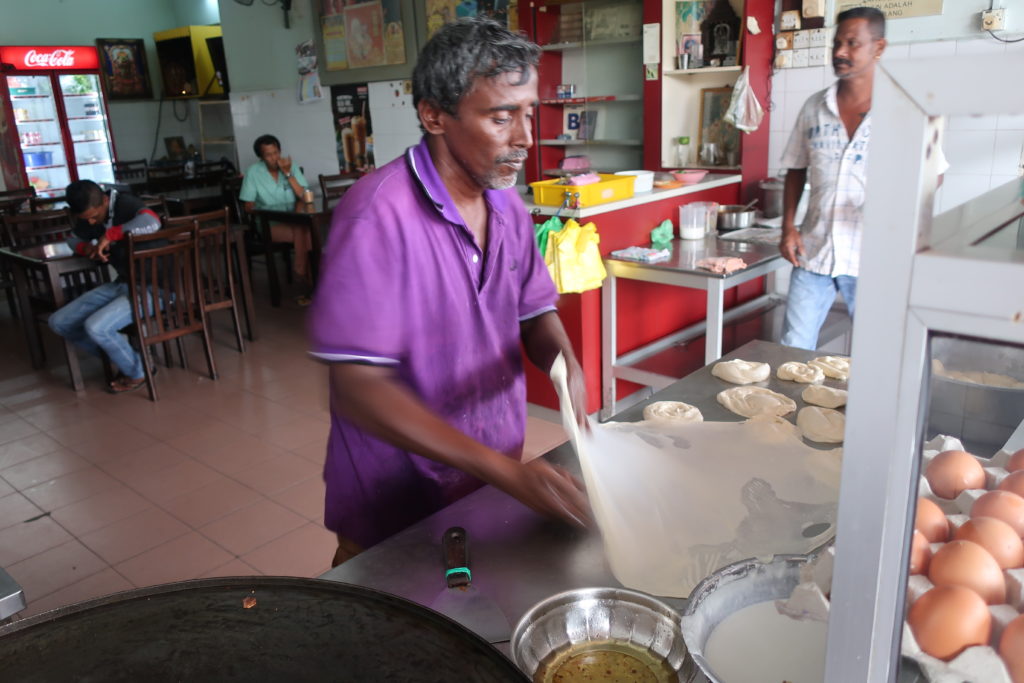 Fried noodles and sauteed rice. That’s the easiest thing to ask and what they have everywhere, for sure. Often accompanied by meat (as it must be said, Malaysians love meat), we ask them most of the time with vegetables, sometimes we are entitled to tofu as a bonus, and often we still find some chicken inside (yes because you have to know that chicken, for Malaysians, is not meat). 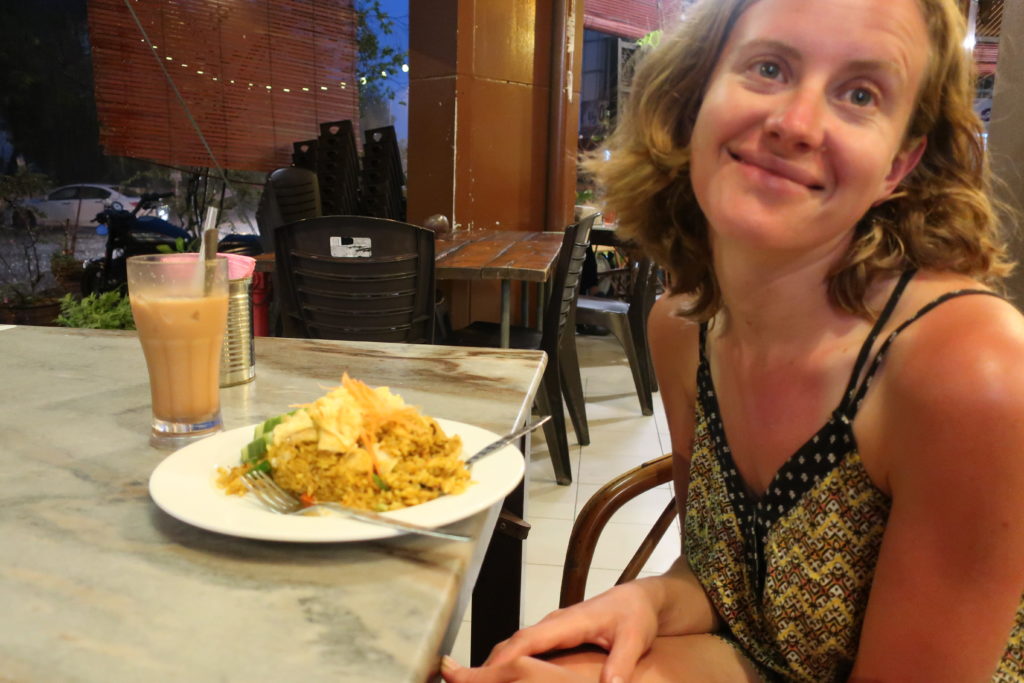 From the first days, we were amazed to find that we could drink fresh juice in a lot of restaurants for about 50 cents: pineapple, orange, watermelon, lichi, sugar cane, and other weird fruits and vegetables (including the most special: corn. Mehdi had it once without knowing what he ordered but could not finish his drink).
Other than that, we often found along the roads, fruit merchants who sell fruits that were unknown to us until now! Our favorite, the rambutan, kind of lichi, see photo below and our video. Bananas are small and sweet, and, as we are ashamed to say, we have not tasted durian, the king of Malaysian fruit (the big green one on the picture). 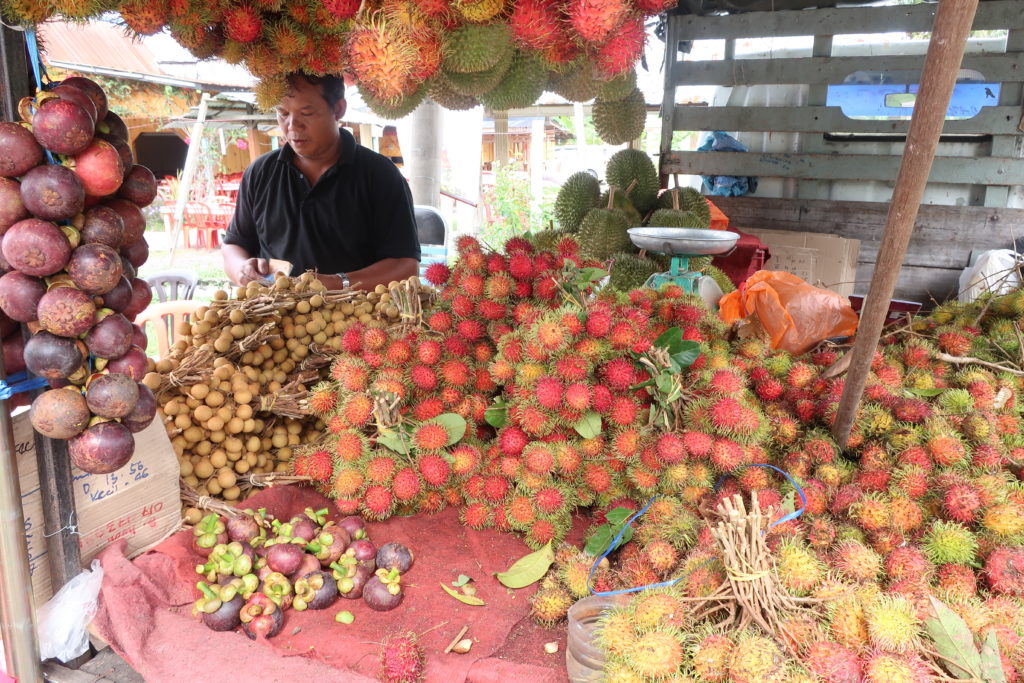 The rivers are numerous in Malaysia and each family goes fishing for its own fish, in sometimes dirty places … But we tried to forget that all the sewers land in the rivers and the sea, often without going through a purification station previously, and tasted the fish, that Malaysians know very well how to cook. Alice even found herself with a whole crab in her plate once. 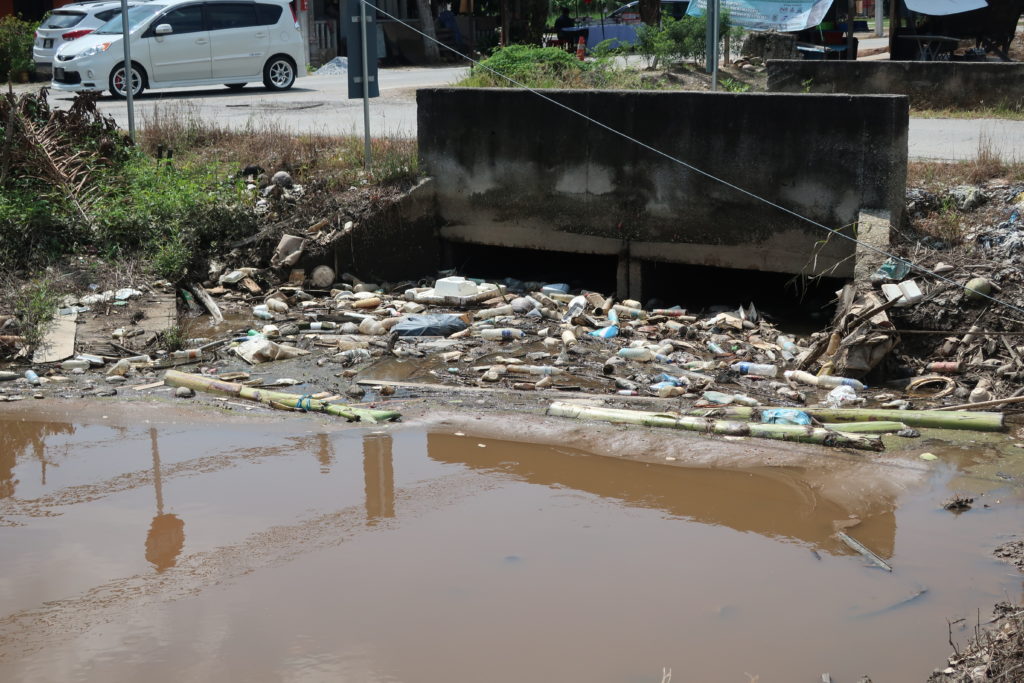 With all these dishes and the ridiculous prices they cost, we decided to send back our stove and pots and eat only at the restaurant! We are therefore lighter and Alice has no bags in the front anymore! This is welcome because the heat in Malaysia is so stifling that you have to hurry up a little if you want some air. This is the second big shock we had when we arrived here: humidity and heat. Temperature averages between 28 and 33 ° C, but it can easily rise to 40 ° C when the sun hits in the heart of the day. This makes the atmosphere more and more heavy until the storm decides to thunder and pour out a flood for a short time; then rebelotte with the sun. Fortunately, the country is quite flat towards the coast and we could pedal without sweating too much. But as soon as there is a small climb, we are swimming in our sweat and we liquefy under the oppressive sun. After trying to bivouac one night without sleeping because of the heat; we understood that hotels will become our daily life for a while, to shower and enjoy a little fresh air to sleep. Thus, towards the end of Malaysia, we decided to send our sleeping equipment to Vietnam. We will take it again when we need it. In the meantime, our bags are light !! 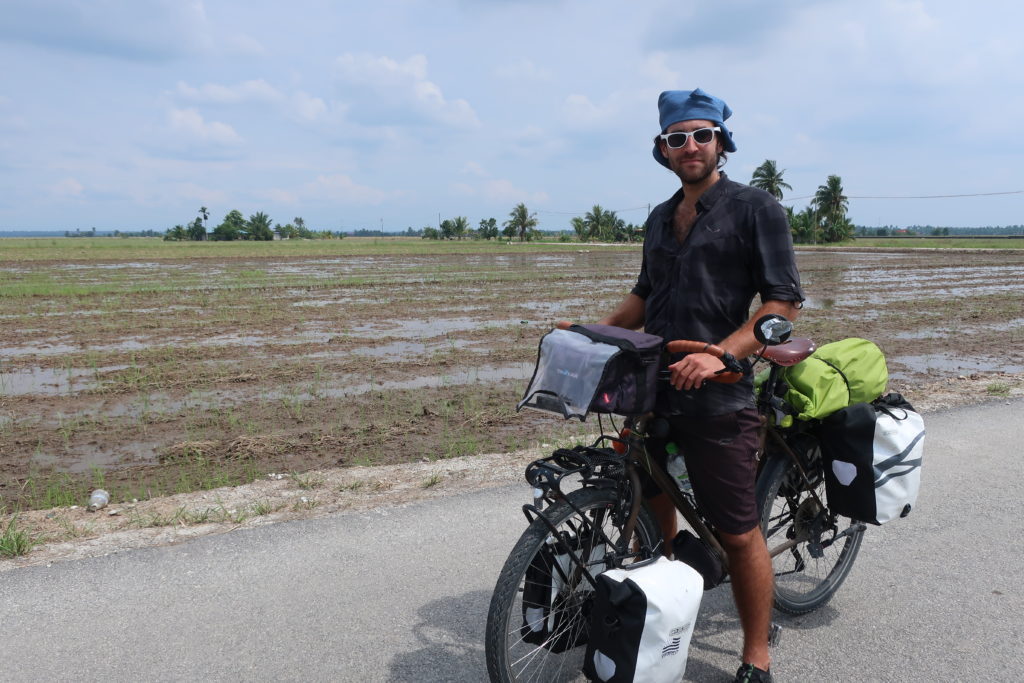 We discovered little by little that here, many cultures and religions live side by side in a relative harmony. When Malaysia was still a British colony, they had brought Chinese to work in the mines. They stayed and most of them became traders. Many Indians had also come at the time and so we can find, a few hundred yards from each other, a mosque, a Buddhist temple and a Hindu temple. This mixed culture really pleased us and we could even learn a few words in several languages. Chinatowns are for us always the most beautiful and the most welcoming, with their little red temple in front of each house. 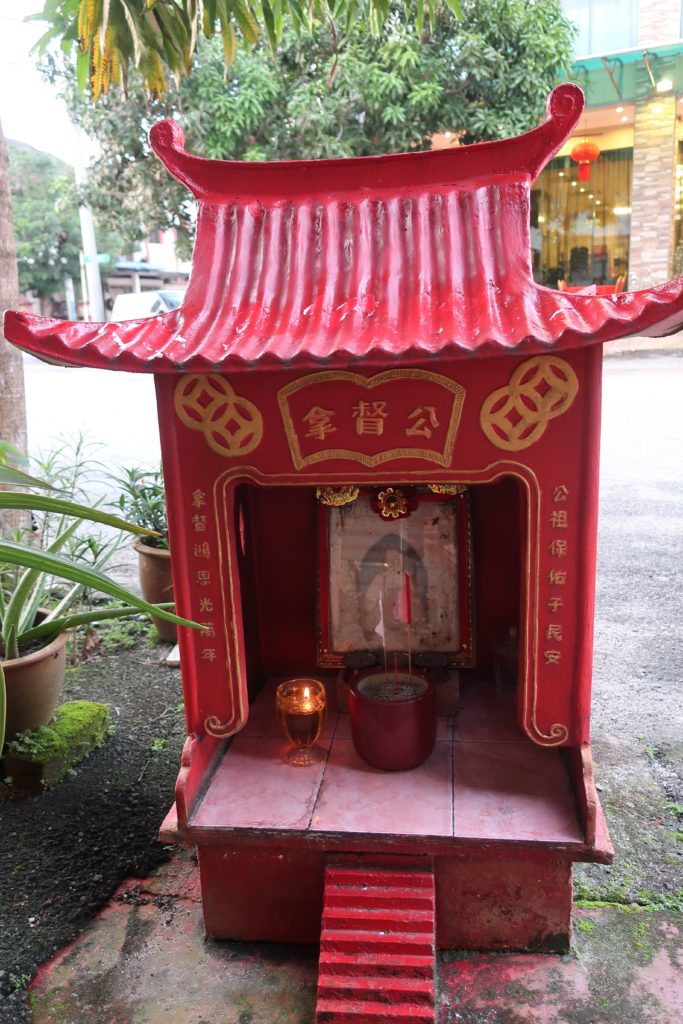 What strucked us the most, after traveling for a month in Iran (which is an Islamic republic), is to see that Malay women (so Muslim women) wear the veil so that we do not see at all their hair, where in Iran a scarf placed nonchalantly on the head is enough. In addition, they have skirts that reach their feet covered with a tunic that covers their arms. We wonder how they can hold it in this heat with these clothes so hot …

So we cycled happily throughout Malaysia for three weeks, between 3 cultures, banana trees, rice paddies and palm groves. We were amazed to see all the stages of maturity of the rice, from the rice field full of water to the beautiful green/yellow field that waves in the wind. 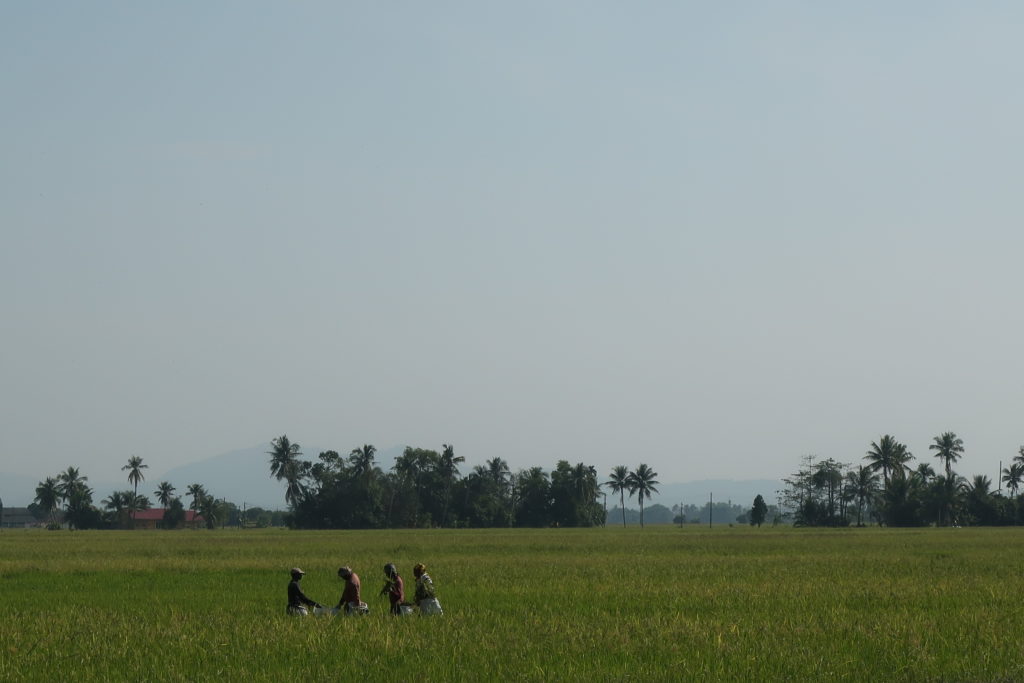 We finally discovered the famous fruit that produces our dear palm oil which we, in Europe, all love for our good care products or food, our biscuits, our spreads … Here on the continent, the plantations still seem quite well organized and respectful, but on the island of Borneo, the other part of Malaysia, thousands of hectares of primary forest are razed every year for palm oil, to the detriment of thousands of plant and animal species, forced to exile or disappear … Mmhhh the good Nutella, thank you multinationals! 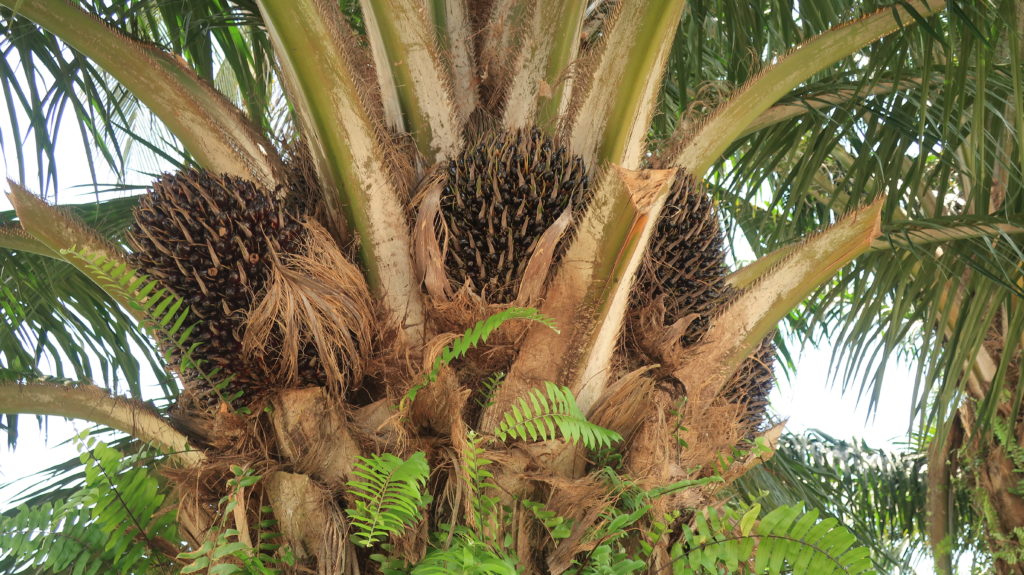 As soon as we arrived the first days, we heard weird noises coming from the trees. They were birds, and their song was totally unknown to us. From the reproduction of electric noise to the melancholy whistle of an infinite call, the birds here don’t have lack of imagination. We had to wait for the rice fields to start seeing them, flash of blue, red, yellow, difficult to take a picture because of their vivacity and their fear of bicycles. Many kinds of herons also bask in the rice paddies, and in the jungles, dozens of birds that were unknown to us. 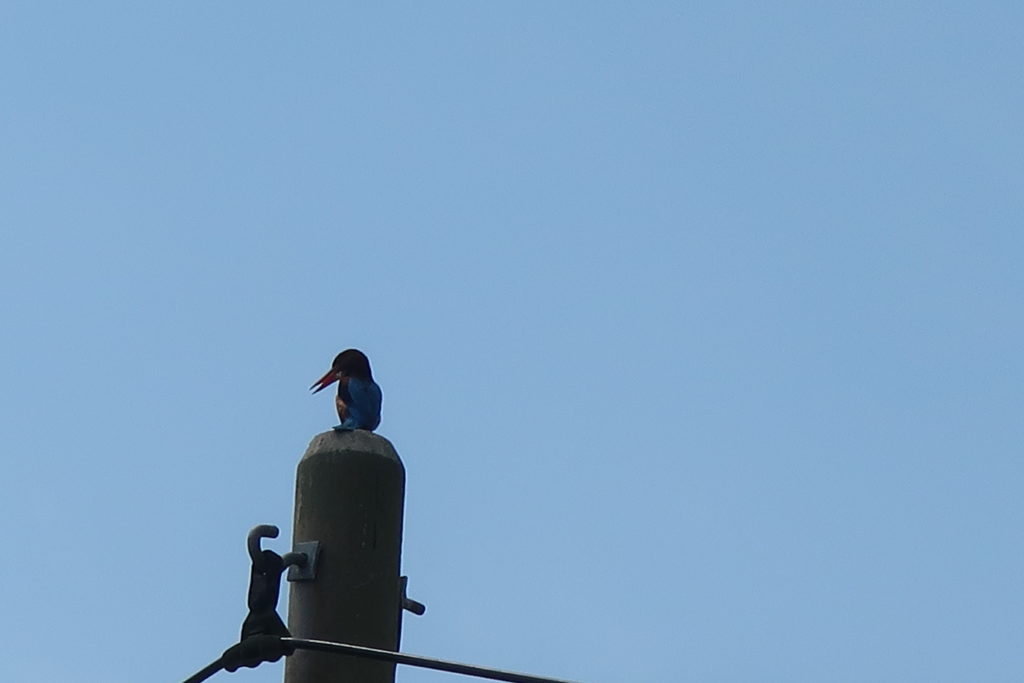 But our most beautiful and funny animal encounters have been with monkeys and monitor lizards. Every day, we saw some. Monkeys sometimes cross the road and hurry to hide in the trees when they see us. Sometimes, when we pass near tall trees, we suddenly hear loud noises in the branches. These are the monkeys who apparently want to hide from us and jump from branch to branch. They would have been more discreet if they had not moved, but it’s always for our greatest pleasure and fun! 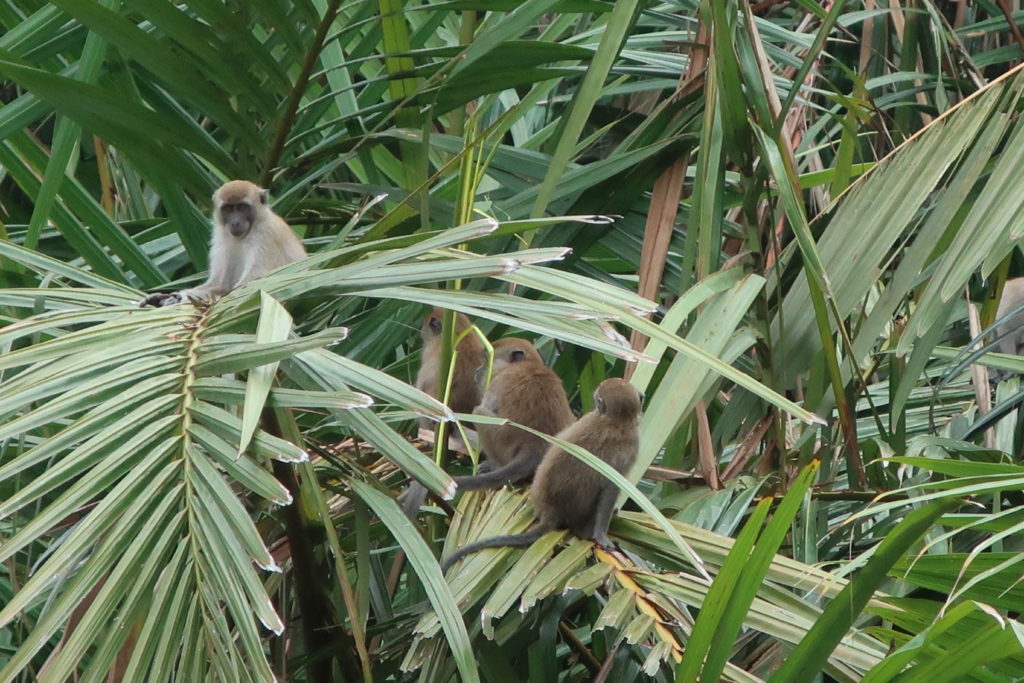 As for the malaysian monitor, this huge lizard that can reach 3 meters of length scared us at first a little. But after some research on the net and several specimens encountered, we quickly realized that this mister is totally harmless and very shy. We always see him rushing into the water as we approach, and we feel guilty for interrupting his nap that seems so enjoyable. 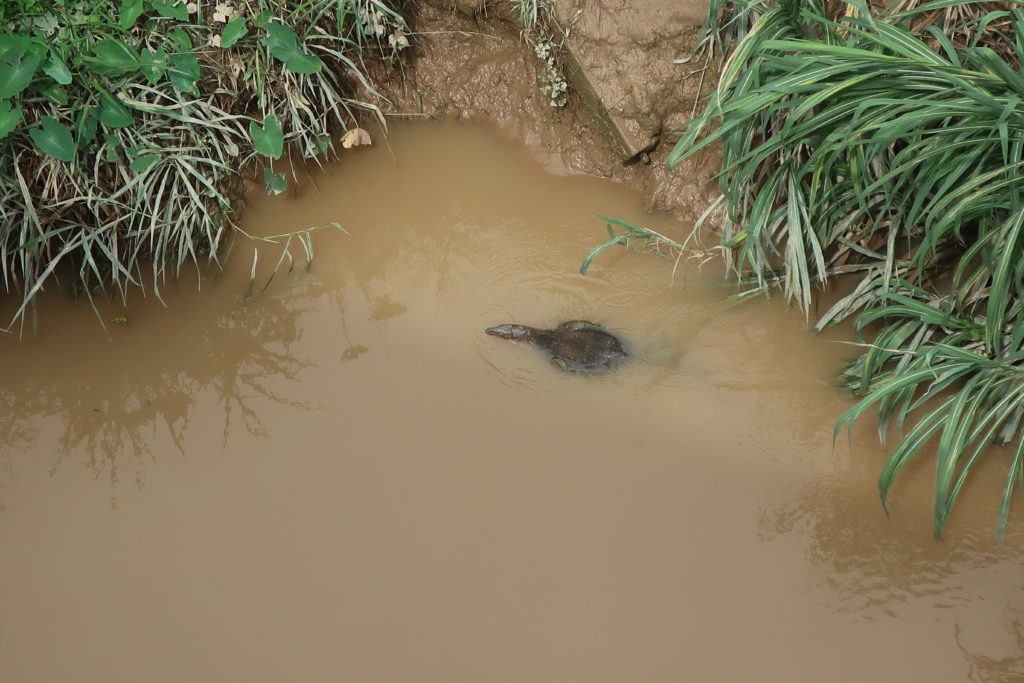 Malaysia, a country of encounters and change of scenery, that we will leave tomorrow. At the time we are writing those lines, the Thai border is teasing us a few kilometers away, behind pretty little mountains covered with greenery. We found beautiful little roads between jungle and rice paddies in this country, but sometimes we struggled on three lanes roads with trucks that sprayed us generously with their black smoke; What will the roads of this new country reserve for us? 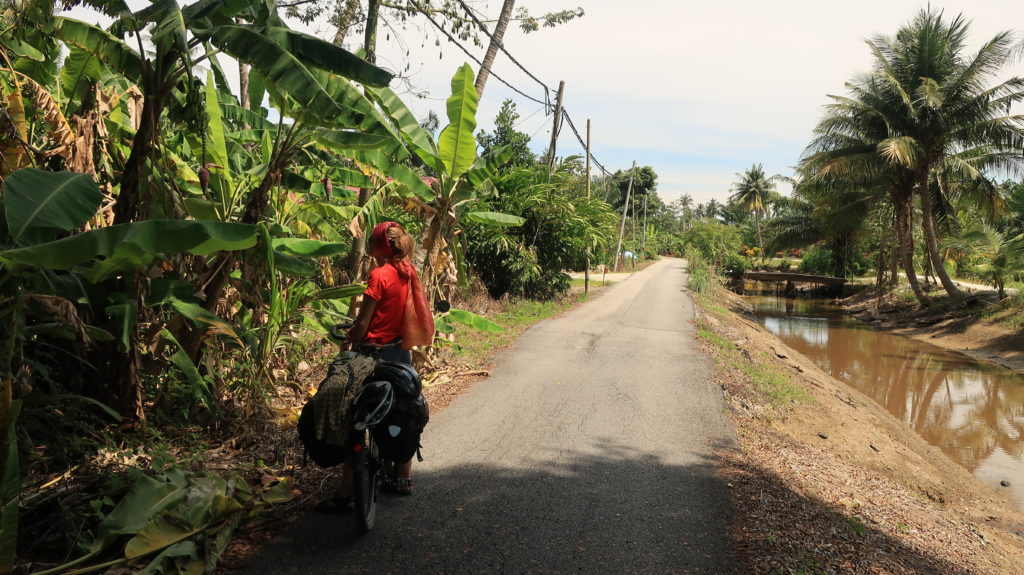