Although we took the decision to go back to Switzerland, we still have time to enjoy Vietnam and travel. From that moment starts a month and a half of rest, good time, and also a little boredom in Danang. We have been through so much heat in recent months that we are happy to be able to stay cool during the hot hours, from 10am to 4pm. But that implies we must find something to do inside in these hours, which is not always the case … the Vietnamese have no problem waking up at 4 or 5 in the morning to run on the beach, drink coffee with friends, etc. But for us, the morning awakenings are more difficult, and when we are finally ready to go out, the sun beats so much that we prefer to wait for 4pm. 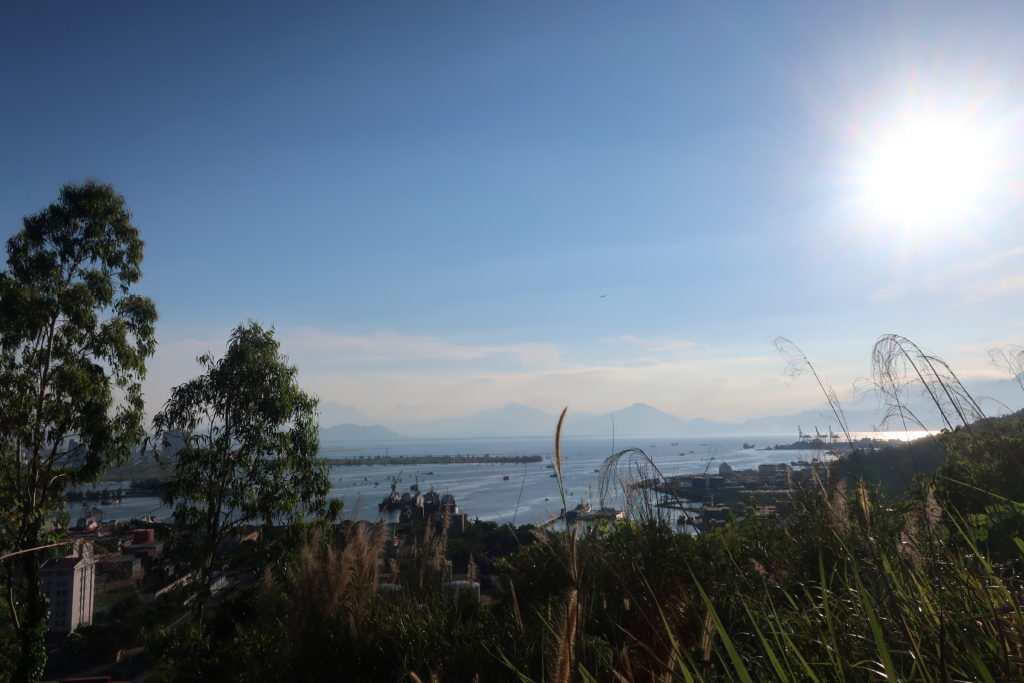 On May 13, however, we are going to live the sun for good, especially Mehdi. It’s the day of the Iron Man 70.3. Jana and Sara came to join us for the weekend to support the champion. 6:20 am, start of the swim. The sea is rough and there are big waves. Mehdi is still happy because he swims the 1,9km in 46mn. His fan club is there to cheer him up when he comes out of the water. 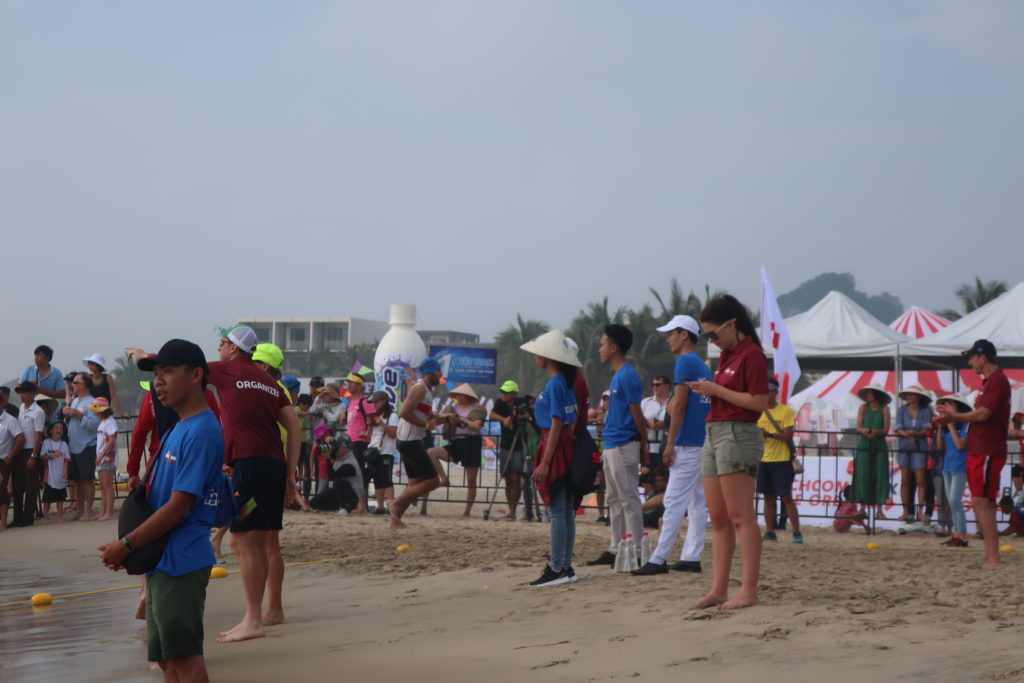 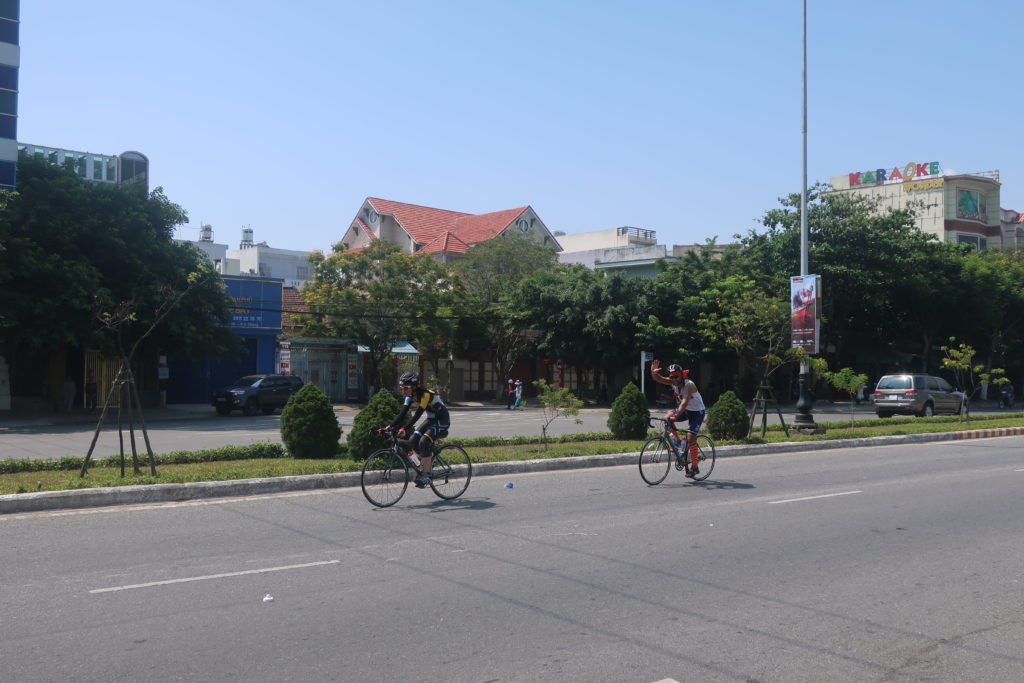 We see runners walking, overwhelmed and stunned by the sun; there is no more shade to protect themselves and they arrive exhausted at the refueling booths to be sprinkled with fresh water. We struggle to find our athlete and when finally we see him, he is in poor condition, but only a few km away from the end. Despite a cloth and a hat on his head, he has the impression that the sun is seeping under his clothes to boil his blood. “Come on, come on!” shout his fan club on their scooters, “it’s almost done, you’ll get there” !! 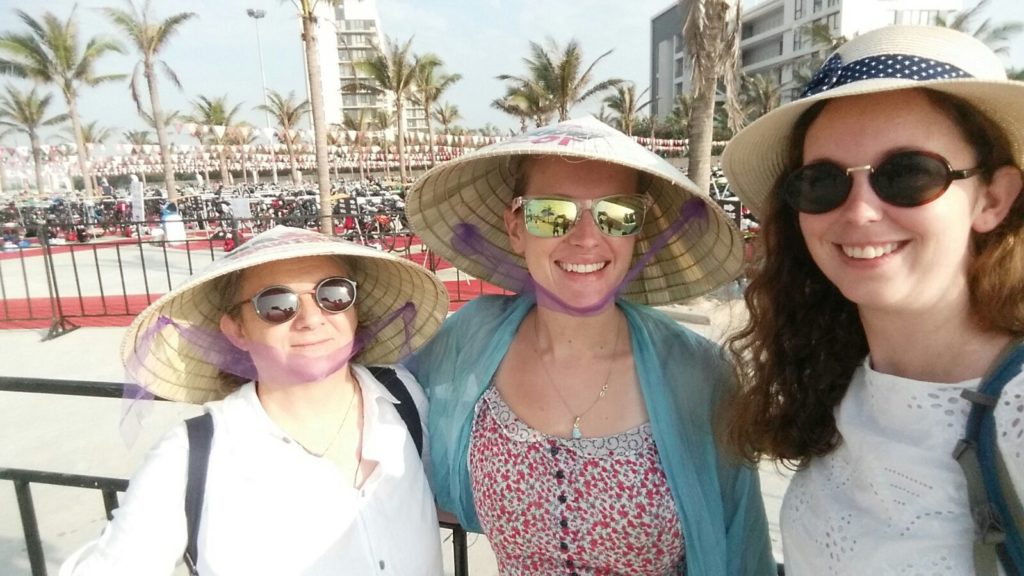 We wait for him at the finish line and are relieved when he finally takes the last step of this event! Rest then well deserved, and Belgian beer evening on the terrace (the beers here are the worst we have ever tasted). 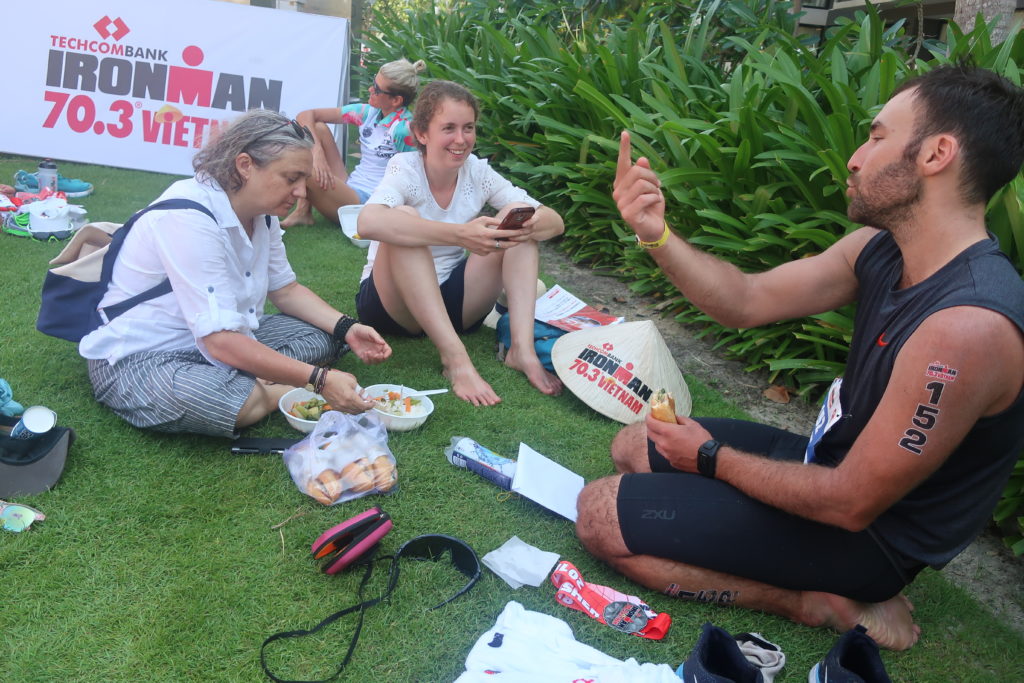 Apart from this event, we have a very quiet life and experience the nonchalance of the south. Learn to feel good with yourself by doing nothing. No profitability, no stress, just be there without expectations. Not always easy and we sometimes reach our limits and go around in circles. We build relationships with the Vietnamese family with whom we live, especially with the grandmother who does not speak a word of English. She speaks to us in Vietnamese, and that suits us very well, we answer her in French. The bond is there so it works; we have in any case the impression to understand her most of the time! She is impressed how Mehdi is kind to Alice: it is true that in Vietnam a man would not do the dishes or the cooking, which Mehdi does not hesitate to do. 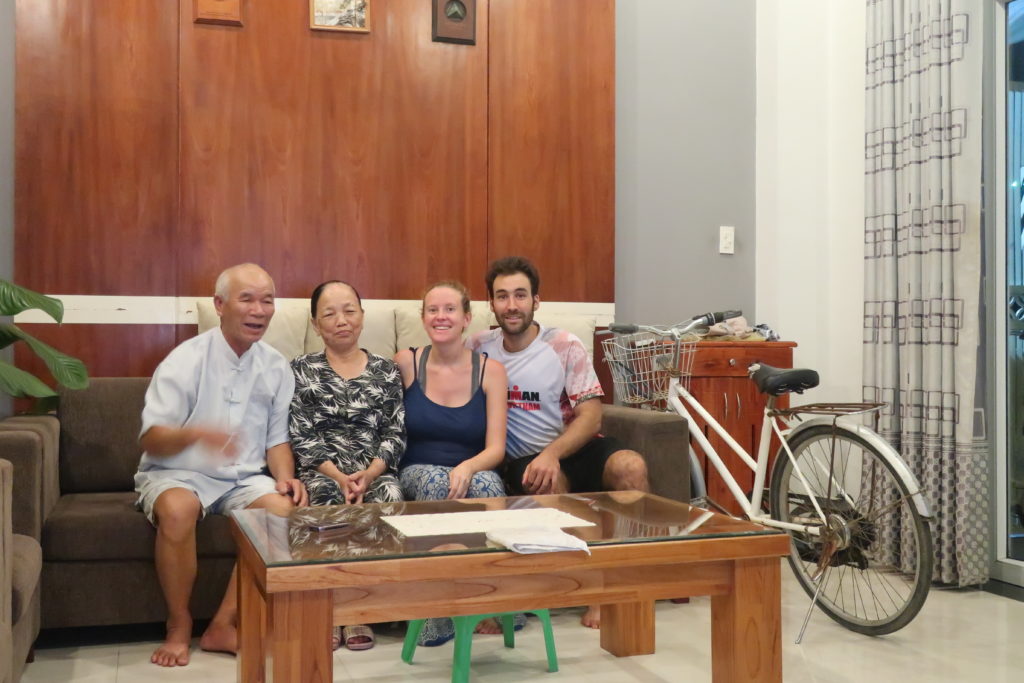 Mehdi gives his basketball training two to three times a week. It is not always easy to be understood and listened to by a group of children who are sometimes very numerous, but he is happy to see that this sport is developing here and that, despite several inconsistencies in learning, everyone is happy and motivated, which is the essential! 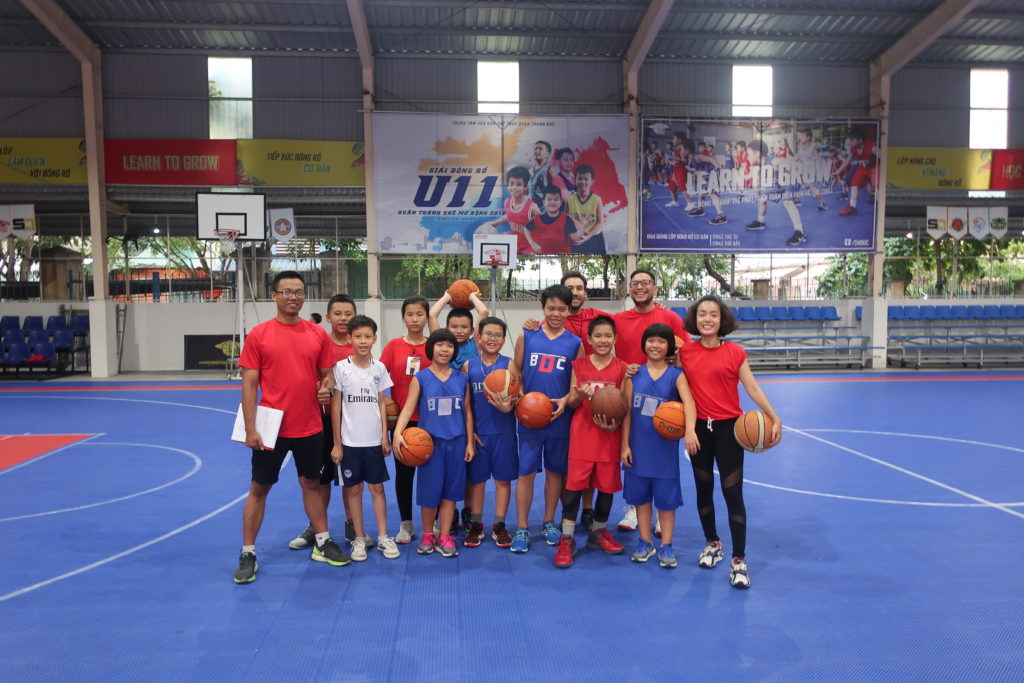 The more we drive in Vietnam, the more we realize with sadness that the Vietnamese drive very badly and cause serious accidents by a total lack of awareness of others on the road. We see about ten accidents, one of which is serious. This does not reassure us. When a scooter engages on the road, the driver does not look if the lane is clear; it is therefore up to those behind to honk, slow down or avoid it. It works most of the time, but when there are big crossovers, or the traffic is very dense, an accident happens quickly. The great quality they all have in their driving is that they stay calm all the time. It’s not like in our countries where people insult themselves in their car and are tense at the slightest deviation from the rule. Here, as there are no rules, everything is respected and people do not get upset, drive slowly and take on themselves. We promise ourself to keep this attitude as long as possible once back in Europe, while applying the traffic rules that make more sense for us at once. 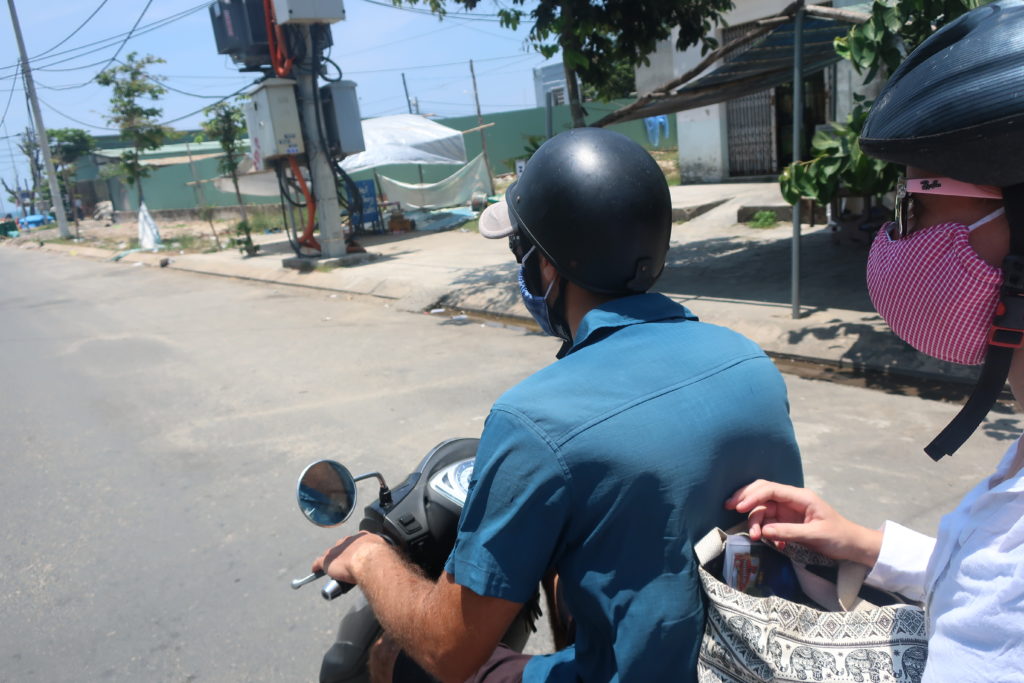 We visit the Steiner Kindergarten in Danang. Alice having been educated in a Steiner school, it is always interesting to meet people in various cultures who also follow this pedagogy. Especially since we are usually welcomed warmly, which makes us feel a bit at home. This welcoming is not lacking this time either, and we are very impressed, knowing now a little better Vietnamese culture, how these women were able to implement a kindergarten so beautiful and neat, providing a safe and nice place to 70 children here in Danang. When they started two years ago, there were apparently only 6 children. Today, there are 100 children on the waiting list; proof that the Vietnamese realize that the school system offered to their children does not allow them to flourish and to have a sense of success in their life. Exit exams are apparently so hard and there is such pressure on young people that many of them have committed group suicides because of these exams. 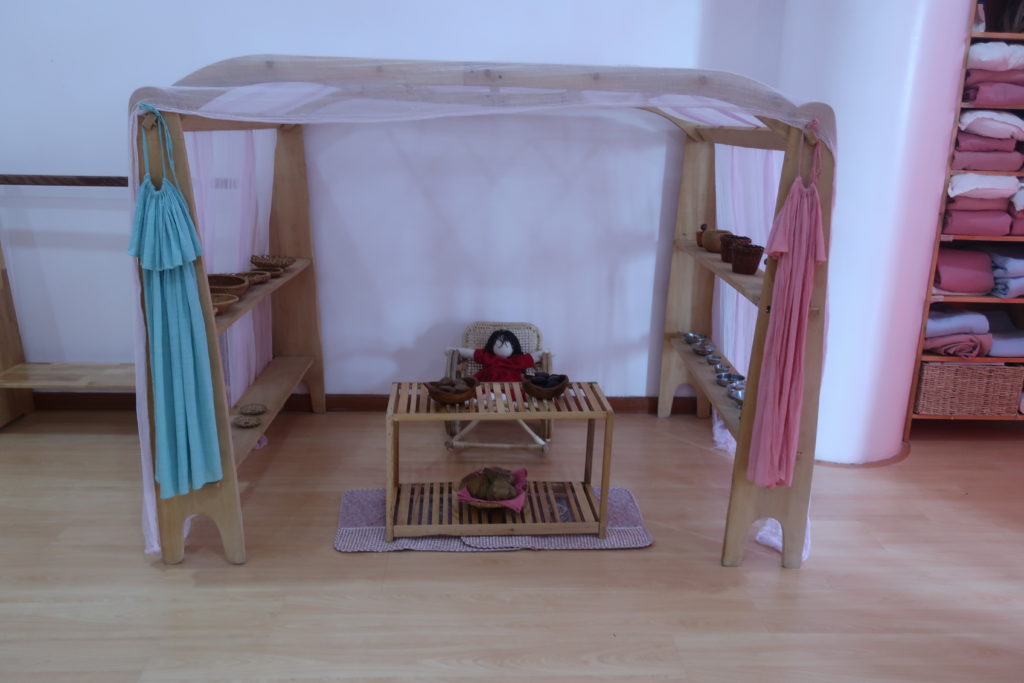 We are gradually getting acquainted with our adopted city for this sedentary part of the trip. We particularly like the Dragon Bridge, one of the 4 main bridges that crosses the very wide Hàn River. 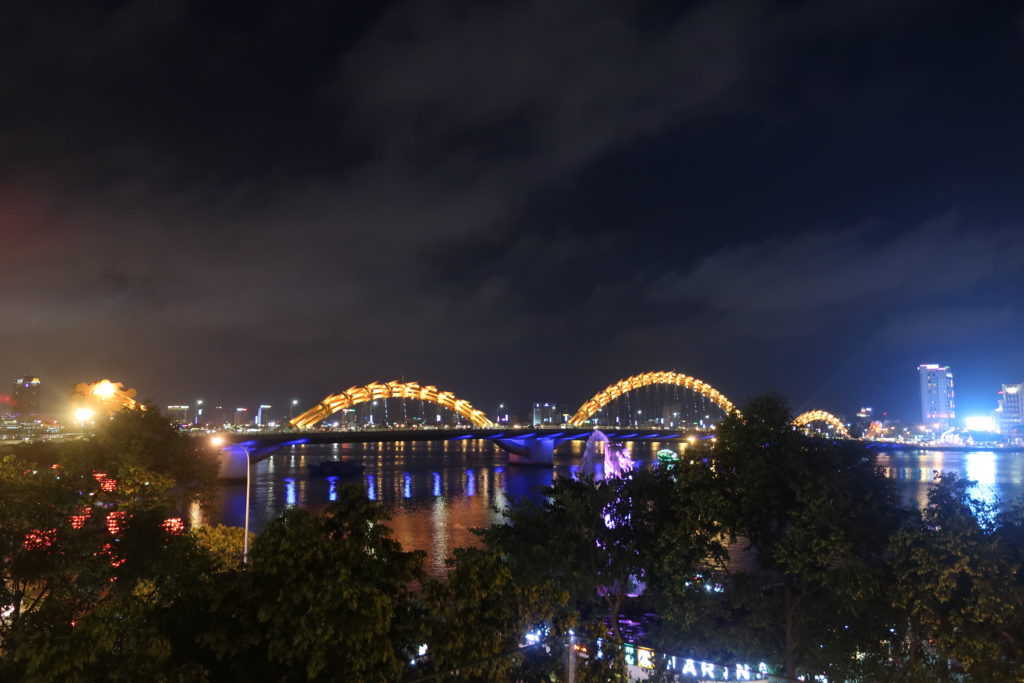 As soon as the sun allows us, we go for a walk on the beach where we find the Vietnamese and their children playing in the sand and bathing. Alice decided to learn how to swim the crawl to make next year an iron man 70.3 relay. Not so simple in the sea with the waves and the water that enters her nose as soon as she resumes her breathing, but so nice to be able to do a little sport without dripping sweat! 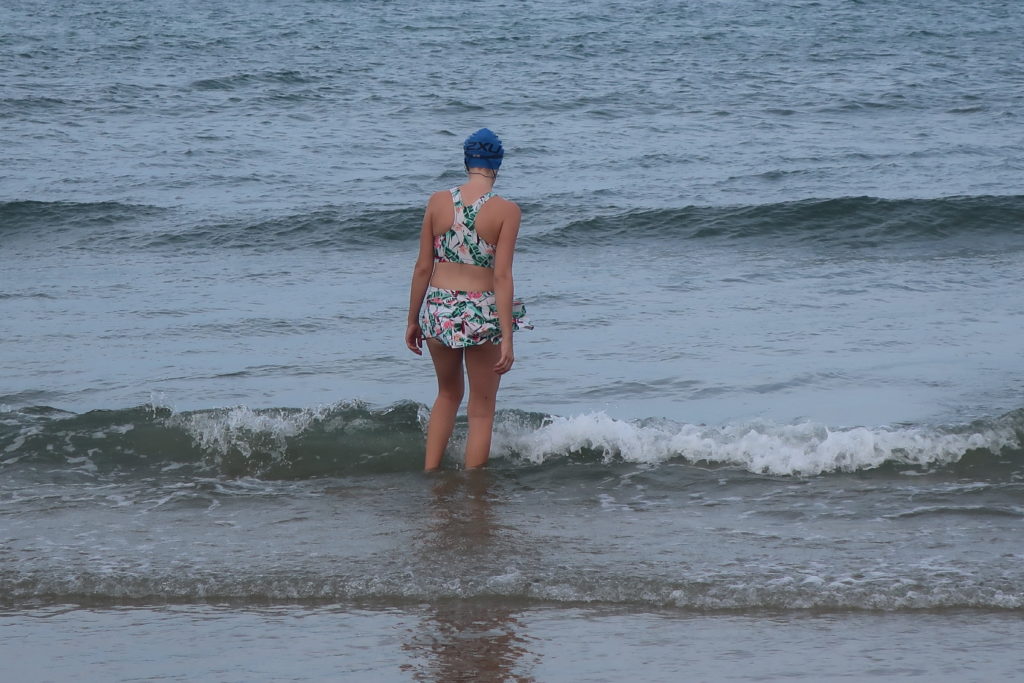 We do small things here and there. We go by scooter to Hue, which is a hellish expedition because we have to go through the cloud pass, a beautiful mountain between Danang and Hue, and that it takes us 3 hours to reach our destination, the ears buzzing and the buttocks paralyzed but the view is worth it! 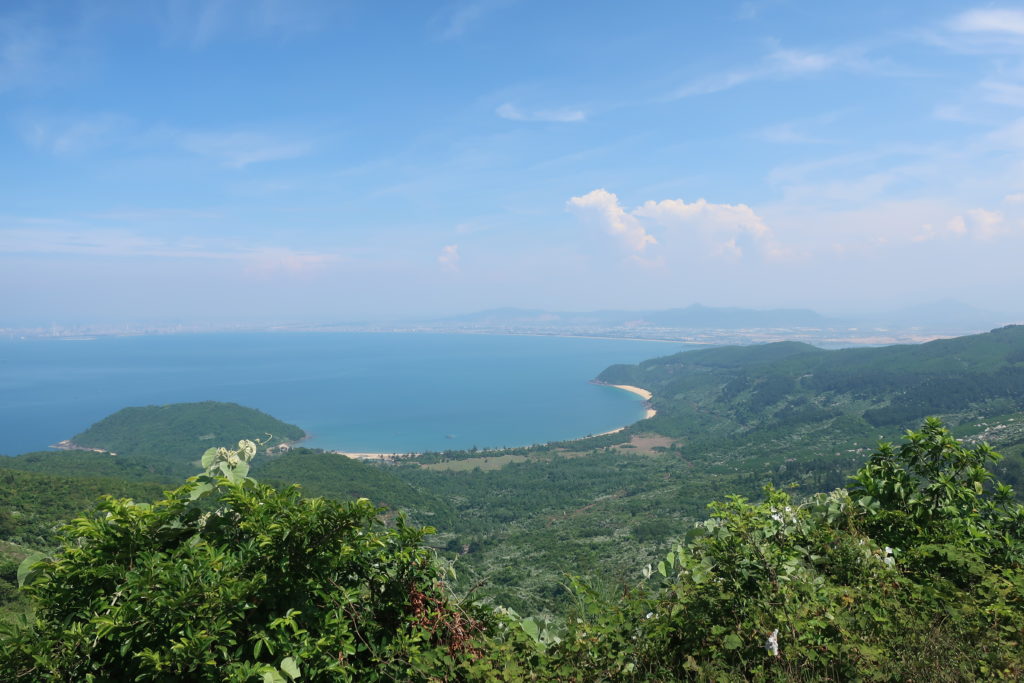 In Hue, we take the opportunity to meet with Jana and Sara, and go swimming in the pool of the French school where Ho Chi Minh studied as a young man. The next day, on the return and the advice of our friends, we stop in a natural park and enjoy a kind of “basins” developed by the Vietnamese in the fresh water of the river. What a delight to feel cold! 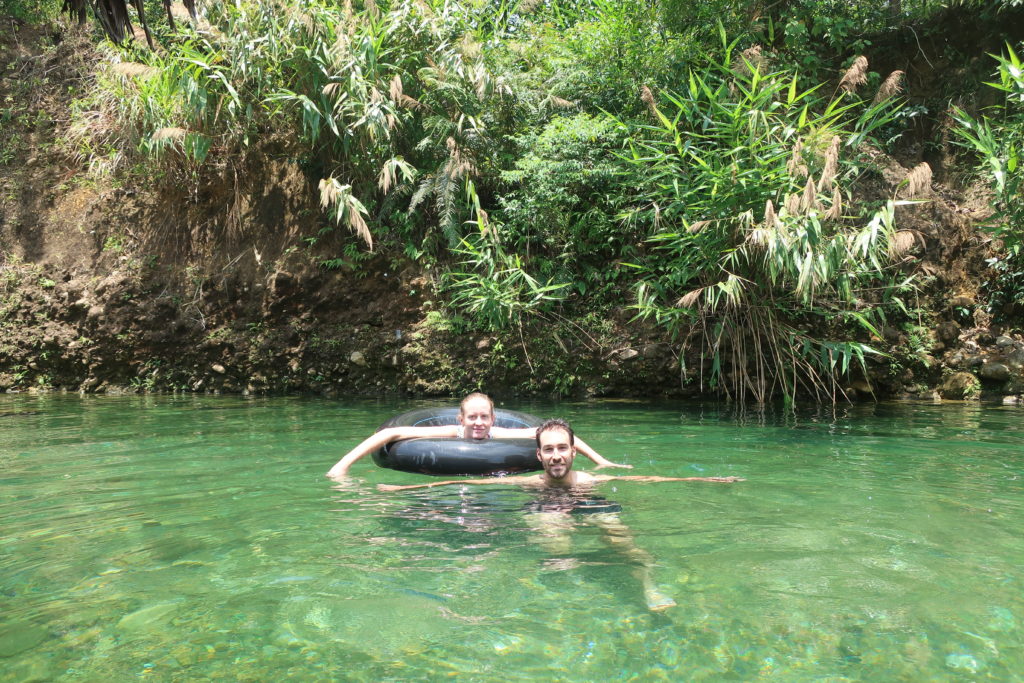 We are cordially invited by our host family to join them for the grandfather’s death day. A tradition here is to meet up with family on the day of the death of a family member, share a good meal, make offerings, and toast together! The whole house is busy preparing 1001 traditional dishes. The whole family is invited as well as the close neighbors; it is mostly men who come and the beer cans go down quickly! The atmosphere is very friendly and joyful and the meal ends late in the afternoon. We are happy to be able to ask questions and communicate with Hien, our owner who is here in Danang these days and who speaks English. 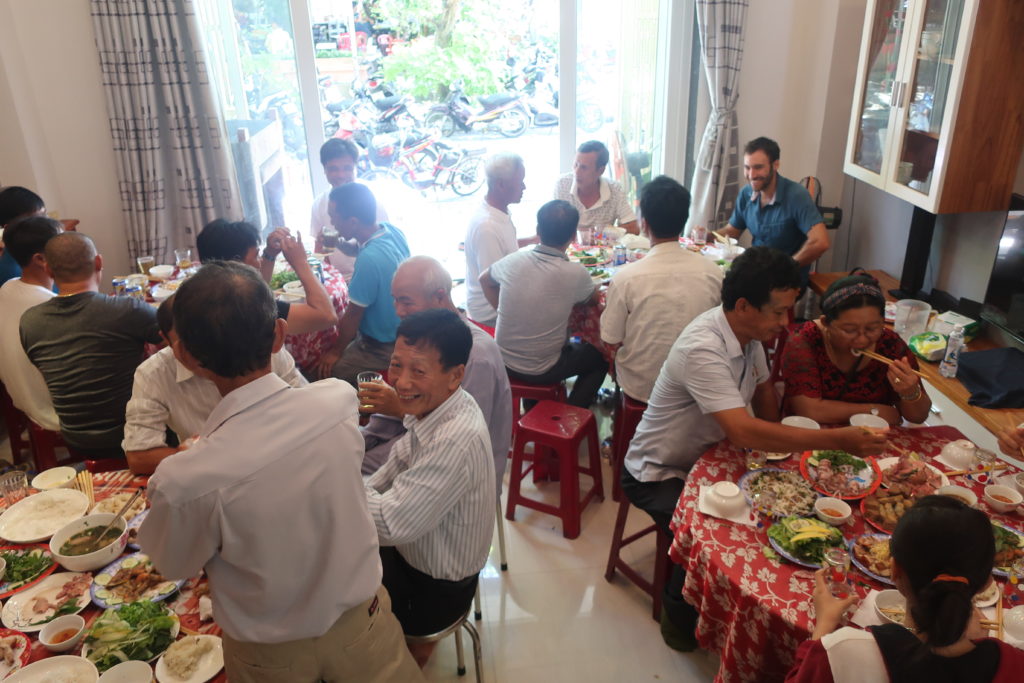 We go to see a puppet show on the water. Puppets are known in the traditions of many countries in the world, but making them evolve in the water is unique to Vietnam. We were a little suspicious because the show was in Hoi An and we were afraid of falling on a tourist trap. But not at all; we loved the simple poetry, the usual aesthetics of which the Vietnamese have the secret and the lightness of the show! 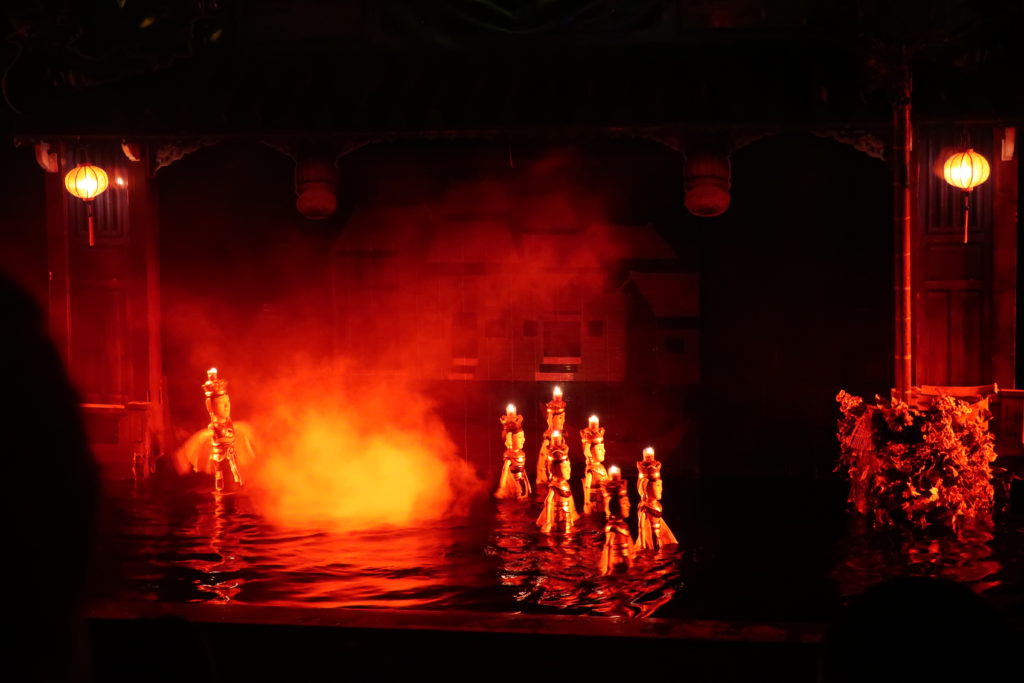 2 Comments on "Rest and sedentarity"